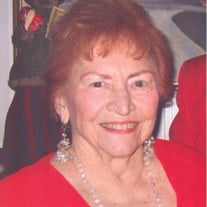 HUNTER (nee Sandgran), Dorothy May “Dottie” – 93, of West Cape May and formerly of Hatboro, PA, passed away peacefully at her home Thursday, April 5th, 2018. Born in West Cape May, Dottie was a longtime resident of Hatboro PA, retiring to her home town in 2000. She took up residence with her husband Paul in her childhood home on Sixth Ave. Dottie was a member of Lehman Memorial Methodist Church in Hatboro for over 50 years and was a member of the Cape May United Methodist Church where she was married. As a member in both she was a strong addition to the choir’s soprano section and performed numerous solos for the congregations. She was also a member of the Abington Choral Club and the Jenkintown Theater where she was a cast member in such stage plays as “Annie Get Your Gun”, “Oklahoma” and “South Pacific”. Dottie enjoyed being a volunteer at Cape Regional Hospital. At 19 she worked at Swain’s Hardware, then as a telephone operator. On the train to Philadelphia, she met and later married a young pilot who was training at the Wildwood Naval Air Station. Dottie was predeceased by her husband Paul and survived by a son Sandy (and Christine) Hunter of West Cape May, a daughter Barbara Sue (and Billy) Garrison of North Cape May; four grandchildren, Brent (Michelle), Bryan (Stephanie), Jessica (Ivan), Jeremy(Caroline); eight great grandchildren, Matthew, Mackenzie, Nicolas, Damien, Maya, Timeo, Bastien and Logan, along with a loving addition to her family: John, Megan (Chris), Jackson and Lola. Dottie’s memorial service will be held on Saturday (April 28th) at 12:00 noon in the Cape May United Methodist Church, 635 Washington St., Cape May, where friends will be received from 11:30 am until 12:00 noon. Interment will be prior to the service on Saturday morning at 10 am in Cold Spring Cemetery, Lower Township for family and close friends who feel the need to attend. In lieu of flowers, donations are suggested in Dottie’s memory to UMCOR (United Methodist Committee on Relief), PO Box 9068, New York, NY 10087-9068. (Spilker Funeral Home, Cape May) info and condolences: www.spilkerfuneralhome.com

The family of Dottie Hunter created this Life Tributes page to make it easy to share your memories.