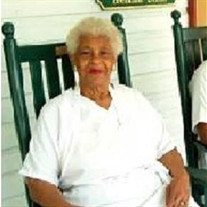 Burton, Dorothy H. “Dot” – 88, of West Cape May went to be with the Lord on Tuesday, February 24, 2015. Born in Richmond, VA, Dot has been a resident of West Cape May since 1950. Dot was well-known around the Cape May Community as being the chef at the Chalfonte Hotel where she worked since she was nine years old beginning at the bath house. Over those many years she enjoyed working alongside her mother, Helen and her sister, Lucille among other family members. She was a devoted member of Macedonia Baptist Church where she was an usher. From the early beginnings of the West Cape May Christmas Parade, Dot worked tirelessly along with her good friend Charlotte Daily to make the parade the success that it is today. Dot will be dearly missed by her many friends throughout the West Cape May and Cape May Communities for the way in which she lived her life and she will be forever loved by her family for being a devoted wife, a loving mother, grandmother and great grandmother. Along with her parents, she is predeceased by her husband, Frezel Burton (1996) and her sister, Cora Johnson (2009). Dot is dearly missed by her loving family which includes her six children, Tina (and Butch) Bowser, Frezel Burton, Guiseppi (and Charlotte) Burton, James (and Sandra) Burton, Henry (and Linda) Burton and Lynette Burton; her dear sisters and best friends, Lucille Thompson and Joi Morton; 12 grandchildren and 12 great grandchildren. Dot’s funeral will be held on Saturday (Feb. 28th) at 3:30pm in the Assembly of God Church, 1068 Seashore Rd., Cape May where there will be a viewing from 2:15pm to 3:15pm. Interment will follow in the Mount Moriah Cemetery, Lower Twp. In lieu of flowers, memorial contributions are suggested to the Dorothy Burton Memorial Fund, checks payable to James Burton, c/o Chalfonte Hotel, 301 Howard St., Cape May, NJ 08204.

The family of Dot Burton created this Life Tributes page to make it easy to share your memories.

Send flowers to the Burton family.