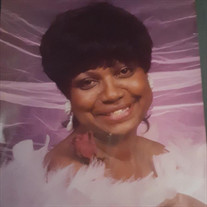 CRUTCHFIELD, Dorothy M. “Dot” – 79, of Oceanview and formerly of Newark, New Jersey, and Fort Pierce, Florida, passed away peacefully on Tuesday, September 15, 2020, at Cape Regional Medical Center. Dorothy was born on July 29, 1941 in Mayesville, South Carolina, to Thomasina Allen and Robert Lesane. She later moved to Fort Pierce, Florida, where she attended Port St. Lucie School District, and later became a full time wife and devoted mother. In 1974, Dorothy moved her family to the State of New Jersey where this became her permanent residence. She enjoyed many activities, including cooking and baking, listening to her music - oldies, dancing, watching wrestling events and most importantly spending time and caring for her grandchildren and great grandchildren. Dorothy was a strong person, known as telling you exactly what was on her mind and not holding anything back. She possessed beautiful grey hair, lovely bright eyes and a beautiful smile. Dorothy was a dialysis patient for 11 years, fighting a long battle up until her final days with us. She is predeceased by her husband, Johnny Crutchfield; her son, Howell Barnes and her brother, Henry Harry. Dot is dearly missed and forever loved by her family which includes her children, Kathleen (and Robert) Bluitt, Paula Barnes, James Barnes, Vincent (and Sharlene) Barnes, Timothy Barnes, and Theresa Barnes; Eight (8) grandchildren and (17) great grandchildren; as well as her extended family and dear friends. Funeral services are being held privately by the family. In lieu of flowers, memorial contributions may be made to the American Kidney Fund, 11921 Rockville Pike, Suite 300, Rockville, Maryland 20852 or online at www.kidneyfund.org

The family of Dorothy "Dot" Crutchfield created this Life Tributes page to make it easy to share your memories.