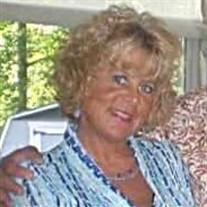 RUSH (nee Ward), Donna Marie – of Cape May and formerly of Boothwyn, PA passed away unexpectedly at her home early Thursday morning, August 21, 2014. Born and raised in Delaware County, PA, Donna graduated from Notre Dame Catholic High School for Girls and later attended Penn State University for journalism. She worked for approximately 10 years as a human resources manager at Crozier-Chester Medical Center before entering into the banking profession in Delaware and most recently in Cape May at the Sturdy Savings Bank where the community embraced her as a result of her vibrant personality. Donna was a spiritual woman and was devoted to her Catholic roots and attended both Our Lady Star of the Sea Church, Cape May and St. John of God Church, N. Cape May. Above all things in her life, it was evident to all who knew Donna that her number one priority was the well-being of her family and her caring, nurturing ways overflowed into her friendships and relationships. Predeceased by her father, Thomas M. Ward, USMC in 2011, she was always her Daddy’s Girl and Donna emulated all that he stood for, and did her best to always make him proud. Donna is dearly missed by her loving family which includes her husband of 33 years, David; three children, David Rush (and fiancée, Erina Cabral); Ryan Rush and Brittany Rush; her mother, Dorothy Ward; three grandchildren, Ryan, Brandon and Marissa; two brothers, Daniel (and Denise) Ward and Thomas Ward. Relatives and friends are invited to her viewing on Tues. (Aug. 26th) from 6pm-8pm in the Spilker Funeral Home, 815 Washington St., Cape May. Mass of Christian Burial will be celebrated on Wed. (Aug. 27th) at 1:30pm in Our Lady Star of the Sea Church, 525 Washington St., Cape May where there will be a viewing from 12:30pm–1:20pm (in church). Interment will take place on Thurs. (Aug. 28th) at 12:00pm (this was originally scheduled for 12:30pm and has been changed) in the Delaware Veterans Memorial Cem., New Castle Co., DE. In lieu of flowers, memorial contributions are suggested to the American Heart Assoc., PO Box 417005, Boston, Mass. 02241-7705 or online at: www.donate.heart.org/

The family of Donna Rush created this Life Tributes page to make it easy to share your memories.

RUSH (nee Ward), Donna Marie – of Cape May and formerly of Boothwyn,...