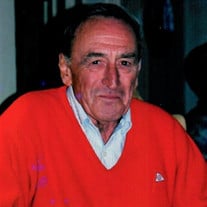 POCHER, Donald W. – 90, of Cape May, passed away at his home on Wednesday, July 17, 2019. Born in Wildwood, with multi-generational roots in Cape May, he was a graduate of Cape May High School (1946) and furthered his education at Rider College on the GI Bill where he earned his Bachelors Degree. A man of honor, he proudly served in the United States Navy during World War II. At an early age Don worked for Pocher & Co. Insurance in New York City and later moved on to a management position with Lloyds Insurance Co., also in New York City. He enjoyed so many things in his life; open ocean racing – sailing in many of the Newport to Bermuda races and the Transatlantic from Norway to Bermuda; an avid post card collector, he wrote the book “Cape May and Vintage Postcards;” playing tennis (member of the Cape May Tennis Club) and above all things precious time with his family and those he loved. He was a lifelong member of the Corinthian Yacht Club, Cape May and a member of the Cold Spring Presbyterian Church. He is predeceased by his wife, Patricia and his three brothers, Joseph, Charles and Walter. Don is dearly missed by his loving family which includes his two children, Carolinn Pocher Woody and Christian (and Meg) Pocher; sister, Joan Green and longtime companion, Marjorie Wetherill. Don’s memorial ceremony and celebration of life will be held on Monday (July 22nd) at 11am in the Cold Spring Presbyterian Church, 780 Seashore Rd., Cape May where friends will be received from 10am until 10:50am. Interment will be at a later date. In lieu of flowers, memorial contributions are suggested to the C. Wallace Stuard Sailing Foundation c/o Corinthian Yacht Club of Cape May, P.O. Box 260, Cape May, NJ 08204. (Spilker Funeral Home, Cape May) info and condolences: spilkerfuneralhome.com

POCHER, Donald W. &#8211; 90, of Cape May, passed away at his home on Wednesday, July 17, 2019. Born in Wildwood, with multi-generational roots in Cape May, he was a graduate of Cape May High School (1946) and furthered his education at Rider... View Obituary & Service Information

The family of Don Pocher created this Life Tributes page to make it easy to share your memories.