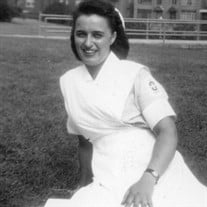 Dolores Catherine (Yashinsky) Milewski Dolores Milewski (89) died peacefully in her sleep Friday, August 26, 2016, while at home in Cape May, New Jersey. She was with her daughter Cathy and had been battling the effects of Lewy Body Dementia. Born in the coal-mining town of Gilberton, Pennsylvania on August 2, 1927, she was the daughter of Mary and Joseph Yashinsky and is preceded in death by her parents and beloved brother Joseph. With her death, Dolores passes the family’s matriarchal torch to her dear friend and sister-in-law, Helen Yashinsky. Dolores was a graduate of Gilberton High School and of the Ashland School of Nursing. She began her 45-year career as a Registered Nurse at the VA Medical Center in the Bronx, the oldest Veteran’s Administration facility in New York City. She retired from nursing in 1987 while working at Ashland State General Hospital and spent the majority of her career serving at Locust Mountain State General Hospital. Her first husband, Vincent Policastro, a decorated WW II veteran, died at a young age, and is the father of Dolores’ first-born son, Thomas Yashinsky (Schuylkill Haven, PA). Her second husband, John Brindle, also deceased, is the father of John Milewski (Springfield, VA) and Cathy Melfi (Cape May, NJ). Dolores was also mother to two stepchildren who preceded her in death, Cherita Sevinsky and Chester Milewski, whose father Chester died in 1987 while serving as mayor of Shenandoah, Pennsylvania. Dolores completed her husband Chester’s term as mayor becoming the first and only woman to hold that position in the borough’s 150-year history. Nursing was her first love, and following a career dedicated to serving the needs of the injured, sick, and dying, she moved to Medford, New Jersey, where she continued her life of service in a new capacity: neighborhood “Mom Mom.” As stay-at-home grandmother to Cathy’s children, Jaime and Kevin Melfi, she had the opportunity to attend numerous school, community, and sporting events and to be part of daily home life in a manner not possible during her time as a career nurse working outside the home. She treasured those years and viewed them as a second chance for which she was eternally grateful. Her family included seven additional grandchildren: Cherita’s children Guy and Tracey Julian and Matthew Sevinsky (son of Cherita and husband Peter Sevinsky); Nick and Cody Yashinsky (sons of Tom and wife Renee Yashinsky); and Jack and Ellie (children of John Milewski and wife Sally McColl). Later she became a great grandmother with the births of Dominick, Gabriel, and Giovanni (sons of Guy and Emilie Julian) and Elizabeth (daughter of Nick and Amanda Yashinsky). She was a cherished aunt, grandmother, and great grandmother and also left an indelible impression on many new and lifelong friends she came to know and love. Cathy’s partner Joe Agosti, Jaime’s boyfriend Keith Wurster, and Kevin’s girlfriend Kristin Bell earned special places in her heart and provided tremendous support during Dolores’ final months and years. Her fellow nurse, co-worker, and dearest friend, Victoria Novak, was a constant source of support, love, and laughter for most of her adult life. Beyond family and profession, Dolores was an enthusiastic sports fan, and particularly enjoyed the Phillies’ World Series victory of 2008 and the New York Rangers’ Stanley Cup win in 1994. A proud Penn State mom and grandmother, she especially enjoyed college football and cheering for her teams, Penn State’s Nittany Lions and the Fighting Irish of Notre Dame. Music was a big part of her life and seeing her all time favorites Ella Fitzgerald and Nat King Cole perform at the legendary Apollo Theater in Harlem were “unforgettable” highlights as were her frequent Barry Manilow concerts at various venues over the years. She also loved lighthouses and oceans, and spent her final years in the shadow of the Cape May Lighthouse basking in the glow of Atlantic sunrises and sunsets. Not bad for the daughter of a coal miner from the tiny town of Gilberton. But in good times and bad, her greatest joy was derived from life’s simple pleasures and the time she spent with family and the many lifelong friends she accumulated during a full and diverse life. In that regard, she died a very wealthy woman. In her final act of service, Dolores has donated her remains to medical science and hoped that in some small way she would contribute to research on the conditions that ended her life and afflict the lives of many. Special thanks to the Humanity Gift Registry, Thomas Jefferson University Hospital, and Penn State Milton S. Hershey Medical Center for making this possible. On Dolores’ behalf, the family wishes to extend sincere gratitude to Heartland Hospice for providing extraordinary and compassionate care during the past year. And we offer a most special thank you to her hospice nurse, Vanessa De La Cruz, who she referred to as her “angel and adopted daughter.” Friends and family are invited to attend a memorial celebration on Sunday, October 30, from Noon to 3:00 PM at Cape May Convention Hall (714 Beach Avenue). Additionally, on that same day, a 9:30 AM mass at Our Lady Star of the Sea (520 Lafayette Street) will be dedicated to the memory of Dolores and her brother Joseph. If you would like to make a contribution in honor of Dolores’ life, please consider the following charities: Medical Mission Sisters http://www.medicalmissionsisters.org/ Fisher House Foundation https://www.fisherhouse.org/ - Although this website offers many options to send flowers, PLEASE OBSERVE the request of the family to send a memorial contributions instead to the above named organizations.

Dolores Catherine (Yashinsky) Milewski Dolores Milewski (89) died peacefully in her sleep Friday, August 26, 2016, while at home in Cape May, New Jersey. She was with her daughter Cathy and had been battling the effects of Lewy Body Dementia.... View Obituary & Service Information

The family of Dolores C. Milewski created this Life Tributes page to make it easy to share your memories.

Send flowers to the Milewski family.