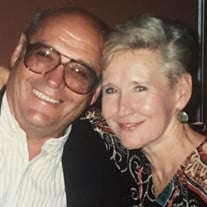 Vernon (Deacon) Kline – 86, of Villas, NJ, born in Reading, PA, passed away peacefully on June 8, 2021. Deacon is preceded in death by his parents Clarence and Helen (Snyder) Kline, his sister, Ruth Snyder, and his brother, Clarence D. (David). Deacon will be profoundly missed by his wife of 65 years, Dixie (Wolf), his daughter Holly Saul, his son Michael (Wendy), his grandchildren Heather Saul (Shawn), Kristy Saul (Jammie), Joshua Saul (Nicole) and Miles Kline, and great grandchildren Aiden Saul, Reese Saul, Kieran Saul, Donavon Saul and Cooper Saul. Deacon is also survived by his sister Janet Moyer and his nephews David Lee Kline, Robert Moyer and niece Joanne Mulvey. Deacon was the ultimate competitor and relished all things sports; after graduating from Muhlenberg High School, Deacon received a full scholarship to Millersville University to play football. All of that changed when Deacon met Dixie, the love of his life. They married and settled down in Reading before shortly moving to Temple, PA. As a father, Deacon was a man way ahead of his time; after work he would juggle diapers and dishes so Dixie could have a break. He was always the first person to volunteer to coach little league, basketball or football, and coached many of his son, Michael’s, teams. Deacon had the world’s best temperament, except after what he considered to be poor calls from refs. When he wasn’t coaching, he would spend time volunteering with the Pioneer Club of AT&T, the Friends of the River Society in Reading, the Humane Society, the Muhlenberg Township Parks and Recreation Department and for the local Board of Elections. Downtime was spent rooting on the 76ers, Eagles and Phillies. He was a beach-lover through and through. He made sure his children and grandchildren could spend every summer “down the shore”, and he would drive down each weekend after work for some fun in the sun and a swim in the ocean. Deacon’s little slice of heaven was Steger’s Beach in Cape May. Everyone on the beach knew and loved Deac; for 30 plus years he was as much of a fixture on that beach as the red lifeguard stand. Annual family vacations included long car rides down to Florida to visit Disney World; his face would beam the moment he entered the parks. Music was a huge part of Deacon’s life, and he passed this love onto his children and grandchildren. The word “no” was not in his vocabulary. He would do anything and everything for his family, and to his family, he was the personification of love. To his family (and to so many others) he was “Pop”, the ultimate husband, father, grandfather and great grandfather. He will be so lovingly remembered each time his family watches a sunset, feels the sand between their toes, hears a song by Sarah Vaughan or sees a pair of Mickey ears. Funeral services are being held privately. In lieu of flowers, donations are suggested to the Usher Syndrome Coalition, online at https://www.usher-syndrome.org/

The family of Deacon Kline created this Life Tributes page to make it easy to share your memories.