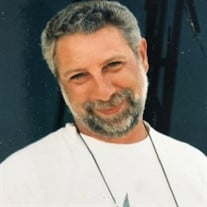 Spinosa, Daniel J. “Danny” - 72, of Cape May passed away on November 3, 2020. Danny was totally devoted to his son Nicholas and loved him beyond words. Nicholas was the most important person in the world to him. Danny loved his family, his Italian heritage and their Traditional Christmas Eve Feast of the Seven Fishes which has been ongoing continuously for generations, and he loved his annual trip to the Thousand Islands and Canada. Danny was born and raised in the Sheepshead Bay section of Brooklyn, NY. Danny was a proud United States Navy Veteran of the Vietnam War. Upon returning home from service, he took full advantage of the GI Bill and graduated from Brooklyn Community College with a degree in Culinary Arts and continued his education at the Culinary Institute of America. Danny was the Executive Chef at NYU Medical Center for 25 years. Danny continued his hospitality career in St. Thomas, USVI as the Innkeeper/Executive Chef of Windswept. It was innkeeping that brought Danny to Cape May, when he began running the Sand Castle by the Sea Guest House then by owning/operating the Cherrystone Manor. Danny was well-known for his over-the-top breakfasts and afternoon teas. Danny was an avid outdoorsman who loved fishing (salt and fresh water), diving, spear fishing, hunting, and hiking; he was a true conservationist, he only took from nature of which was going to be food on the table. He was doing farm to table/hook to cook way before it became fashionable using ingredients from his exquisite herb and vegetable gardens. Danny was passionate about food, and his attention to detail was unrivaled. Nicholas and Danny shared this passion and often tag teamed in the kitchen producing some of the most amazing feasts. Danny passed on to his son, "that a family meal and all meals enjoyed together make all those around the table, family; it is a time to laugh, tell stories, and bare souls." Danny loved to travel and has been around the world plus some. He loved immersing himself in the culture, food, and traditions of the locals where ever he traveled. Danny believed traveling was one of the greatest and most impactful forms of education. Danny had a big heart and was always ready to help anyone in need. Folks would often find rice pudding, roasted red peppers, baked ziti, bundles of herbs, lasagna, cookies, or a bountiful basket from his garden on their doorstep. Danny is predeceased by his parents Emil and Louise Spinosa. Danny is dearly missed and forever loved by his family which includes his beloved son, Nicholas J. Spinosa; cousins, Johnny and Barbara Spinosa, Charlotte Nindle Wellins; as well as many 2nd cousins, extended family, and lifelong friends, Robert and Janice Robertazzi; dear friends, Steve Cole, Chuckie Debono, and Dennis. Funeral services are being held privately.

Spinosa, Daniel J. &#8220;Danny&#8221; - 72, of Cape May passed away on November 3, 2020. Danny was totally devoted to his son Nicholas and loved him beyond words. Nicholas was the most important person in the world to him. Danny loved his family,... View Obituary & Service Information

The family of Danny Spinosa created this Life Tributes page to make it easy to share your memories.