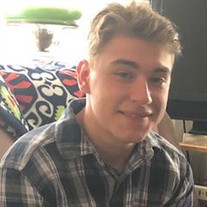 HUEBER, Daniel Raymond “Danny” – 22, of Cape May passed away tragically on May 14, 2020 as the result of a motor vehicle accident. Born in Cape May Court House, “Monkey Man” as he was affectionately known, has been a lifelong resident of the area and was a graduate of Lower Cape May Regional High School’s Class of 2017. After graduation, Danny worked at the Erma Deli as a cook and was also an instructor/teacher at the Art of Gymnastics and Cheer in Cape May Court House. A terrific athlete, Danny was a Nationally Ranked Gymnast and in his younger years he won the Title of Junior Mr. Acrobat of Southern New Jersey at age 11. He also enjoyed skateboarding, soccer, wrestling, competition cheerleading, lacrosse and football (Minnesota Vikings Fan). Most of all, in Danny’s all too short life here on earth, he enjoyed being with his family the absolute most. He is reunited with his dad, David R. Hueber, Sr. who predeceased him in 2013. Danny is dearly missed and forever loved by his family which includes his two daughters, Kenzie and Celeste; his Mom, Shauna Hueber; four brothers, David Jr. (wife, Gabi), Dylan, Donivan and Devon; his Mom-Mom, Betty Bailey; Pop-Pop, Gene Taylor; paternal grandparents, Ivy and Robert Gregory; the mother of his daughters, Selena; nieces, Charlotte and Sophia Hueber; as well as, many aunts, uncles and cousins. Funeral services are being held privately. In loving memory of Danny, simply offer a random act of kindness to someone who is unsuspecting and maybe also route for the Minnesota Vikings for a game or two! In lieu of flowers, if you would like to help Danny's family please visit his gofundme page by clicking this link https://www.gofundme.com/f/puq8nu-daniel-hueber-memorial-assistance

The family of Danny Hueber created this Life Tributes page to make it easy to share your memories.