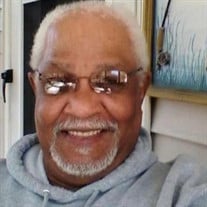 MIDDLETON SR., Curtis C.T. – 80, of West Cape May and formerly of Coatesville, PA, passed away suddenly and unexpectedly on April 13, 2022 while he was working in his yard. Born and raised in Coatesville, PA, he was proud of his hometown where he attended local schools. A man of honor, Curt served in the United States Army during the Vietnam War. Always dedicated and conscience, Curt’s character led the way throughout his working career as he began his early employment on the docks, and then went on to work for the City of Cape May as a police officer and most recently worked for the Casino Control Commission, He loved spending quality time with family and friends; shooting pool almost every Wednesday at the VFW and being near the water, whether it be fishing or just sitting there with his cup of coffee and his newspaper with his breakfast sandwich. He wasn’t the Starbucks kind of guy he loved his McDonald’s breakfast sandwiches. Curt also loved barbecuing, spending time with his grandchildren when he was able to; watching the Dallas Cowboys play (he was a die-hard Cowboys Fan); going target practicing at the shooting range with his nephews and son; and going to car shows with his son. He loved the old Muscle Cars! Curt was very family oriented, very giving, thoughtful and compassionate. There was nothing he wouldn’t do for anyone. All you had to do was make a phone call and he would be there, whether it was just a talk or a helping hand. He will be truly missed by everyone who knew him, but he will live in our hearts forever. He is predeceased by his mother, Lillian Owens Middleton Pennington; father, Clarence Middleton; brother, C.T. Middleton; sister, Alberta Hines and daughter, Dolly Elizabeth Butler. Curt is dearly missed and forever loved by his family which includes his son, Curtis C.T. Middleton, Jr.; three granddaughters, Chelsea, Brittany and Jade; grandson, Curtis “Timmy” Middleton, III; one great granddaughter, Imani; as well as many nieces, nephews and cousins who were very dear to him. Relatives and friends will be received on Saturday (April 23rd) from 10am – 11am in the Spilker Funeral Home, 815 Washington St., Cape May where Curt’s funeral service will begin at 11am. LIVESTREAM ACCESS begins at 10:50am - click this link https://www.hdezwebcast.com/show/curtis-ct-middleton-sr Interment will follow in the Cape May County Veterans Cemetery.

MIDDLETON SR., Curtis C.T. &#8211; 80, of West Cape May and formerly of Coatesville, PA, passed away suddenly and unexpectedly on April 13, 2022 while he was working in his yard. Born and raised in Coatesville, PA, he was proud of his hometown... View Obituary & Service Information

LIVESTREAM ACCESS begins at 10:50am by clicking this link https://www.hdezwebcast.com/show/curtis-ct-middleton-sr