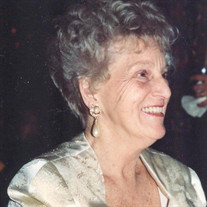 RILEY (nee Bortney), Camilla “Connie” - 98, of Cape May peacefully passed away Thursday, June 15. 2017. Connie was born in Selje, Norway. She was active in the war and received a commendation for her efforts. She emigrated to the United States when the war ended to join her parents here in Cape May, New Jersey. Her smile was the first greeting you received at the Lobster House where she was a hostess for 34 years. She was also an accomplished seamstress, making the uniforms at the Lobster House and sewing for private clients as well. Connie was a woman of true grace. She faced life with strength and dignity, always carried forward by her great faith and optimism. Her smile radiated from her very soul giving support to those who loved her. She is predeceased by her two sons, John and Paul Riley and her four siblings, Knut Bortney, Sigvald Bortney, John Bortney and Odney Aarsheim. Connie is dearly missed by her loving family which includes her daughter, Sonja (and Mack) Amaker; and her three grandchildren, beloved Daniel, Jonathan and Sandra; and her nieces Elisabeth de Neergaard (Claes) Eva Hedenstrom (Bjorn), and Donna Bolye. Her family would also like to thank the wonderful aides and nurses who so lovingly cared for her in her final days. Funeral services will be held on Tuesday (June 20th) at 11am in the Spilker Funeral Home, 815 Washington St., Cape May where friends will be received from 10am – 11am. Interment will follow in the Cold Spring Presbyterian Cem., Lower Twp. In lieu of flowers, memorial contributions are suggested to the Family Promise, 505 Town Bank Rd., N. Cape May, NJ 08204. Info and condolences: spilkerfuneralhome.com

RILEY (nee Bortney), Camilla &#8220;Connie&#8221; - 98, of Cape May peacefully passed away Thursday, June 15. 2017. Connie was born in Selje, Norway. She was active in the war and received a commendation for her efforts. She emigrated to... View Obituary & Service Information

The family of Connie Riley created this Life Tributes page to make it easy to share your memories.