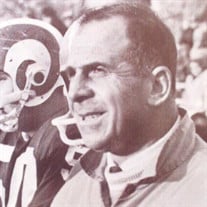 VENUTO, Samuel Lawrence – 87, South Jersey Legendary Football Coach. Born November 2, 1926, Died July 12, 2014. Predeceased by his wife, Rodney Schellenger Venuto. Leaves behind devoted children, Jason (wife Laurie), Sam (wife Diane), Becky (husband Bill) and Melissa (wife of the late Sam Battiato); grandchildren, Garrett, Chase, Amanda and Ricky; sister, Rose Venuto Natale and brother, George Venuto. Born in Ardmore, PA to Amelia Menghetti Venuto and Joseph Venuto, Sam graduated from Haverford High School in 1944 after a remarkable scholastic career in football and baseball. Right after high school he enlisted into the U.S. Marine Corps where he saw active duty during World War II. His children and grandchildren marveled at the stories he would recall from his tours of duty, especially those from his experiences in China. Sam attended Guilford College in North Carolina and carved out a superb career in football and baseball, capping his collegiate career by being named a First Team All-American half-back during his junior and senior years. In 1952, he joined the Washington Redskins professional football team, where he had a successful and promising career until it was cut short by a neck injury. Sam later earned his Master’s degree from the University of North Carolina in 1956. While attending Guilford College, Sam met his future wife, Rodney Schellenger Venuto. Together they moved to Salem, NJ, where Sam had been offered the head coaching job at Salem High School. Though he only intended to stay a short time in Salem, it grew to 35 years as Sam became a solid, mentoring coach, teacher, athletic director and friend to those in the Salem community. During his tenure in Salem, Sam guided his Rams to four Tri-County Championships, two Group II football championships, and earned South Jersey Coach of the Year in 1977. He was inducted into Haverford High School Sports Hall of Fame, Salem County Hall of Fame, Guilford College Hall of Fame, and NJ Football Coaches Association Hall of Fame. Sam, Rodney and their family spent their summers in Cape May, NJ, where Sam made lasting friendships with so many locals and “cottagers”. They were members of the Corinthian Yacht Club of Cape May and The Beach Club of Cape May. Sam will be deeply missed by his family and friends. A tribute to his life will be celebrated at 11AM on Thursday (July 24th) at Cape May United Methodist Church, 635 Washington Street, Cape May, NJ (Parking is available close-by in the Acme parking lot). Photos of Sam and his family may be viewed on his tribute page at www.spilkerfuneralhome.com In lieu of flowers, memorial contributions are suggested in Sam’s memory to the charity of your choice. (Spilker Funeral Home, Cape May)

The family of Coach Sam Venuto created this Life Tributes page to make it easy to share your memories.

Send flowers to the Venuto family.