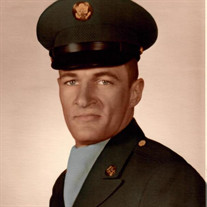 McDevitt, Charles F., Jr. “Chuck” – 73, of Cape May, passed away on Thursday, November 29, 2018. Born in Philadelphia, PA, Chuck has been a longtime resident of the Cape May area. A man of honor and valor, Chuck proudly served in the United States Army during the Vietnam War as a Staff Sergeant in the Fourth Army, 3rd Battalion, 30th Artillery. During his younger years he worked as a self-employed carpenter and dry-waller, and was a consistent subcontractor of Bowman Builders and Long Brothers. More recently he worked for the Cape May-Lewes Ferry and retired in 2017. Chuck was a quiet man who lived life on his terms and for his family. He put others first before himself. He enjoyed many of the simple things in life; playing poker, black jack, craps and slots at the Casino along with bowling, golf and horseshoes but most of all, simply being with his family and grand dogs. He is known for his hand-shakes, fist bumps and I love you’s. His infamous goodbye line was always “the couch is calling my name.” His “breakfast of champions” as he called it, was a coffee and Boston cream donut or blueberry muffin. He also enjoyed dinners at the Lobster House where he would have a whiskey sour sweet on the rocks, shrimp cocktail and the Lobster House Special. He is predeceased by his foster parents, Michael and Ann Yaworski; foster brother, Michael Yaworski, foster sister, Terri Yaworski and brother, Patrick McDevitt. Chuck is dearly missed by his loving family which includes his wife of 50 ½ years, Jackie (nee Sheppard); daughter, Stacey (and Kurt) Hughes; 2 granddaughters, Jenna and Jordan Surran; 2 foster sisters, Eileen “Patsy” (and James) Magill and Margaret “Peggy” (and Gil) Maries and brother, Joseph McDevitt. Relatives and friends will be received on Friday (Dec. 7th) from 11am until 12 noon in the Spilker Funeral Home, Cape May where relatives and friends will honor and celebrate Chuck’s life with a time of sharing thoughts, memories and love beginning at 12 noon. Interment with military honors will follow in the Cold Spring Cemetery, Veteran’s Field of Honor. In lieu of flowers, memorial contributions are suggested to the Wounded Warrior Project, PO Box 758517, Topeka, Kansas 66675-8517 or online at www.woundedwarriorproject.org Info and condolences: spilkerfuneralhome.com

The family of Chuck McDevitt created this Life Tributes page to make it easy to share your memories.

Send flowers to the McDevitt family.