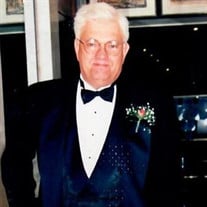 The Honorable Christopher Valentine Dietz, passed away peacefully at his home in Cape May, NJ surrounded by his loving family on September 14th, 2019. Chris, who was born on February 14th, 1936, lived many lifetimes. Born in Bayonne, NJ to Pauline and Casper Dietz, he was raised in Jersey City along with his younger sister, Patricia. His family later moved to Rahway, NJ, where he graduated from high school. He completed his undergraduate degree at Georgetown University. He attended Naval Officer Candidate School in 1958, and subsequently served in the United States Navy until 1961 when he was honorably discharged. He furthered his education at Rutgers Law School. Upon completion of law school, he opened a private law firm in Rahway, NJ. Chris began his political career in 1966 when he was elected as the youngest delegate to the Constitutional Convention and served as the Chairman of the Rules Committee. He held the position of Assistant Counsel to former Governor Richard J Hughes before working on Lyndon B Johnson’s Presidential campaign and becoming the youngest Chairman of the Democratic Committee in Union County. Chris also ran for New Jersey State Senate in 1971. In 1975 he was appointed by Governor Brendan Byrne to become Chairman of the New Jersey State Parole Board, a title he held until 1985. He was the president of the Association of Paroling Authorities International from 1983 to 1985. While holding both titles, he revolutionized and reinvented the parole system in New Jersey to refocus its efforts on rehabilitation and reintegration. Upon leaving the Parole Board, Chris received an appointment as a New Jersey Administrative Law Judge in Trenton, NJ. In 1991 he was appointed to the Superior Court of New Jersey in Elizabeth by Governor James Florio. He finished his judicial career as a Worker’s Compensation Judge in Camden, NJ. Aside from his many esteemed educational, political, and career achievements, his greatest achievement of all was to have met and married his soul mate, Tina Marie Grover. They had two beautiful, loving, and caring children, Cassandra and Christian, and enjoyed 30 years of marriage. Christopher had a heart so full of love and a personality so large that everyone who met him fell in love with him. It is without question that he changed the lives of every person he came in contact with. He was charismatic, intelligent, and had a wicked sense of humor. Christopher truly lit up a room. Even after being diagnosed with Alzheimer’s in 2009, he never lost that sense of humor or his unflinching love for his family. He lived every day doing whatever he could to make you laugh and feel better. He bought a home in Cape May for his parents 50 years ago and was a long-time summer resident. He moved to Cape May full time with his wife in August of last year to celebrate his daughter’s wedding. He spent the final days of his life in a home he loved surrounded by his adoring family. He often said, “Life is a tolerated intrusion upon my eternity”. To those of us who have loved and lost him, we feel as if it will be an eternity until we see him again. He is survived by his loving and devoted wife, Tina, his daughter, Cassandra Dietz, her husband, Michael Rabito, his son, Christian, his sister, Patricia Dobson, his nephew, Nicholas Gervasoni, and many friends and family. To say he will be missed dearly is an understatement. There will never be another man like The Honorable Christopher Valentine Dietz. There will be a viewing on Wednesday, September 18th from 6pm – 8pm in the Spilker Funeral Home, 815 Washington St., Cape May. A second viewing will be held the following day, Thursday September 19th in Our Lady Star of the Sea Church, 525 Washington St., Cape May from 12:15pm – 1:45pm where Mass of Christian Burial will follow and begin at 2pm. Interment will be private and at a later date. In lieu of flowers, memorial contributions are suggested to be made to The Christopher Valentine Dietz Scholarship Fund through “In Memory Of” for your convenience and acknowledgment, online at www.inmemof.org/chrisdietz or checks can be mailed to “In Memory Of” PO Box 5472, Charlottesville, VA 22905 (re: Chistopher Dietz). Info and condolences: www.spilkerfuneralhome

The Honorable Christopher Valentine Dietz, passed away peacefully at his home in Cape May, NJ surrounded by his loving family on September 14th, 2019. Chris, who was born on February 14th, 1936, lived many lifetimes. Born in Bayonne, NJ to Pauline... View Obituary & Service Information

The family of Christopher V. Dietz created this Life Tributes page to make it easy to share your memories.