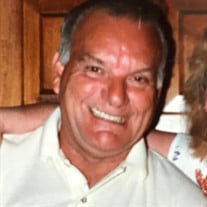 Christopher Joseph McCarthy - age 89, of Williamstown and formerly of Cinnaminson died in his home surrounded by loved ones on February 5, 2019. Chris will be missed by his loving family which includes his wife of 67 years, Joan (nee Collison); 6 children, Joanne (James) Street, Kathleen (John) Reckard, Christopher (Kathleen) McCarthy, Joseph (Patricia) McCarthy, Daniel McCarthy and Maryanne "Mimi" (Kevin) Fisher; 11 grandchildren, Jason, Jonathan, Christopher Jr., Karri Lynn, Kyle, Joseph Jr., Kevin P., Thomas, Kaitlyn, Kevin D and Ryan; 5 great grandchildren, Owen, Brayden, Lyla, Cameron and Eli. Brother of Alice Tuzi and the late John McCarthy and the late Marie Endt. Many nieces and nephews. Chris was born and raised in Atlantic City. This is where his love affair of the Jersey Shore began. He spent summer vacations in North Wildwood with his family making wonderful memories and many trips to the casinos. Chris served in the United States Air Force for 22 years where he received 4 commendation awards and retired Chief Master Sergeant. He then started his 22-year career in Human Resources at Hahnemann University Hospital where he was the Manager of Training and Development. While in the military and working at Hahnemann, he took college courses and earned his MBA from Rutgers University. He encouraged many to pursue their education as well. He would say, "when it's too hard for everyone else, it's just right for me" as support when times got tough. After retirement, Chris enjoyed traveling with Joan. They were "snowbirds" and spent winters in California where they could be with the West Coast McCarthys. Proud of his Irish heritage, he was able to visit Ireland twice. Here he enjoyed singing in the pubs and soaking up all things Irish. Yes, Chris was the life of the party who always wanted to have a good time. He was so friendly and had a great sense of humor. He was called "Mayor" because everyone knew him and loved him. Chris was a devoted Phillies, Eagles and Mummers fan. He witnessed his Phillies win 2 World Series, a Super Bowl win for the Eagles, and never missed the New Years Mummers Parade. Nothing was more important to Chris than his family, or as he referred to them "my people." His legacy will go on through those lives he touched through the years with his wisdom, advice and generosity. "His people" will miss him dearly. Mass of Christian Burial will be celebrated on Wednesday (Feb. 13th) at 12 noon in St. Mary’s RC Church, corner of Main Street and Carroll Ave, Williamstown where there will be a viewing from 11am until 11:50am. Interment with military honors will follow in the Gloucester County Veterans Memorial Cem., Williamstown. In lieu of flowers, memorial contributions are suggested to Samaritan Healthcare and Hospice.

Christopher Joseph McCarthy - age 89, of Williamstown and formerly of Cinnaminson died in his home surrounded by loved ones on February 5, 2019. Chris will be missed by his loving family which includes his wife of 67 years, Joan (nee Collison);... View Obituary & Service Information

The family of Chris McCarthy created this Life Tributes page to make it easy to share your memories.

Send flowers to the McCarthy family.