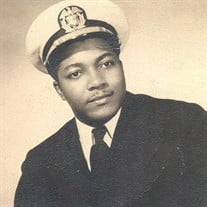 FREELS, Chester Alves – 93, of West Cape May passed away peacefully on Friday, January 15, 2016. Born in Hebbardsville, KY, Chester was a longtime resident of West Cape May after moving here from New York City with his wife, of 71 years, Barbara. A man of honor, he enlisted in the Merchant Marines at the age of 18 and was a United States Coast Guard Veteran of WWII. While he was in the Officers’ Training Corps he achieved, and was awarded Valedictorian of his class. During his military career, he achieved the rank of 2nd Assistant Engineer on the historic Booker T. Washington. He also achieved the rank of Fireman, Third Class. Early in his life, he worked as a machinist for the Brooklyn Navy Yard until it closed. Thereafter, he worked for, and later retired from the US Postal Service. After retiring from the Postal Service, he worked for a short time as a bus driver in New York City. Chester was a member of the Allen AME Church and the VFW, Cape May. Chester enjoyed the life living by the sea. He was a dedicated family man, with a high moral standard, who worked hard to make sure his children achieved the most in life. To pass his time and keep his mind sharp, he would work on the daily puzzles in the paper. Chester loved to use tools for any tinkering that needed to be done. Storytelling was a favorite pastime of his, and his family loved to be the active listeners. While enjoying his much deserved retirement, he enjoyed having his grandkids visit and being there for his extended family through his endless generosity. He is predeceased by his son, Chester David Freels. Chester is dearly missed by his loving family which includes the love of his life, Barbara; three sons, Steven Freels, Phillip Freels, and Michael (and Linda) Freels; daughter-in-law, Lydia Freels; also many nieces, nephews and cousins. Funeral services will be held on Thursday (Jan. 21st) at 11am in the Spilker Funeral Home, 815 Washington St., Cape May where friends will be received from 10:30am to 11am. Interment with military honors will follow in the Cape May County Veterans Cem. In lieu of flowers, memorial contributions are suggested to: Disabled American Veterans, 1010 Bayshore Road, Del Haven, NJ 08251 or DAV.org. Info and condolences: spilkerfuneralhome.com - Although this website offers many options to send flowers, please observe the request of the family to send a memorial contribution to the above named charity instead.

FREELS, Chester Alves &#8211; 93, of West Cape May passed away peacefully on Friday, January 15, 2016. Born in Hebbardsville, KY, Chester was a longtime resident of West Cape May after moving here from New York City with his wife, of 71 years,... View Obituary & Service Information

The family of Chester Alves Freels created this Life Tributes page to make it easy to share your memories.

FREELS, Chester Alves – 93, of West Cape May passed away peacefully...

Send flowers to the Freels family.