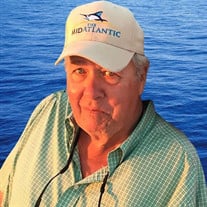 Charles Earl Langan Jr. died on Tuesday March 2, 2021 in Cooper Hospital, Camden NJ as the result of a serious fall. Charlie was 85. Born in 1935 in Orange, New Jersey, he was the oldest son of Dorthea and Charles Langan Sr. Charlie began his 36-year career with NJ Bell in the drafting department, earned his business degree at Rutgers University and later transitioned to AT&T following the breakup up of the Bell System. He held several management positions at AT&T primarily in the sales and marketing divisions. Charlie was a true Jersey Boy whose love of the beach and the ocean began as a small child. He spent every weekend over a 20-year period living aboard his boat in Beach Haven NJ. During this time, he and his wife Mary took many trips aboard the Right Choice to various spots throughout New England and the Chesapeake. After his retirement they headed south where they lived aboard their boat in Coconut Grove, Fl. where Mary continued to work for AT&T. Here they made many friends and got to enjoy the warm waters of the Bahamas and the Florida Keys. Charlie was always up for adventure and was able to travel with Mary on her many business trips throughout Asia, Europe, and the Americas. In 1997 Charlie and Mary returned north to Cape May where they moved on land and built their home called White Caps. Here they hosted many holidays and celebrations with family and friends. When he no longer owned a boat, he began a second career at age 62 working as the charter fishing coordinator for South Jersey Marina. He loved working the many fishing tournaments throughout the year and often said he would pay them just to be able to work there. During this same period Charlie and Mary spent every February in Islamorada, Florida. He continued to be drawn to the sea throughout his entire life. Charlie Langan was a big guy with an even bigger heart. He was dependable, loyal and a natural leader in business and his private life as well. Truly his was a life well lived. He is survived by his wife Mary, son Richard Langan and wife Leslie, grandchildren Brittney and Brandon Langan, son Charles Langan, brother John Langan Sr. and wife Susan, brother David and wife Susan, niece Jamie Langan, nephew John Langan Jr., brother-in-law David Simon, sister-in-law Judith Vit and husband George, sister-in-law Kathy Feron and husband Steve as well as many much- loved nieces, nephews, and friends. Abiding by his wishes, Charlie’s ashes will be scattered upon the waters off Cape May on a warm day this summer followed by a memorial service and a true celebration of this man’s life. Contributions in his memory can be made to his favorite charity, St. Jude’s Children’s Hospital. “Say not in grief he is no more but in thankfulness that he was.” – Hebrew Proverb

Charles Earl Langan Jr. died on Tuesday March 2, 2021 in Cooper Hospital, Camden NJ as the result of a serious fall. Charlie was 85. Born in 1935 in Orange, New Jersey, he was the oldest son of Dorthea and Charles Langan Sr. Charlie began... View Obituary & Service Information

The family of Charlie Langan created this Life Tributes page to make it easy to share your memories.