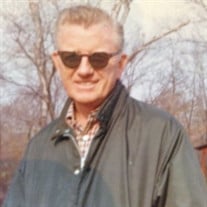 CARR, Charles F. – 88, of Egg Harbor Township passed away on Friday, May 23, 2014 at his home. Graduate of South-East Catholic High School, Philadelphia. A man of honor, Charlie was a United States Army Veteran of World War II. Charlie worked in the auto parts sales business in Philadelphia for 40 years, the last 20 of those years he owned his own business before retiring in 1989. He was an easy man to get along with and always grateful for any help given to him in his later years. He was predeceased by his wife, Marie L. Carr (2012); parents, John and Nellie; brothers, Edward, Thomas, John, Eugene, Joseph, Michael and Dennis; sisters, Mary and Catherine. Charlie is survived by his step-daughter, Diane (and Roy) Couto; grandson, Alex Couto, and niece, Ellen Carr. He is also survived by his neighbors who were like family, Walt & Peg Walczak, Bill Coolahan and Joann & Bob Weber. Catholic Prayer Services will be held in the Holy Cross Cemetery Mausoleum Chapel, Mays Landing on Friday (May 30th) at 11:30AM with entombment to follow. In lieu of flowers, donations to Associated Humane Societies, Inc., Humane Way, PO Box 43, Forked River, NJ 08731 would be appreciated. (Spilker Funeral Home, Cape May) info and condolences: spilkerfuneralhome.com

The family of Charles F. Carr created this Life Tributes page to make it easy to share your memories.

Send flowers to the Carr family.