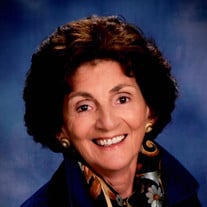 Carmelina "Millie" Di Dolci, (née Scozzari) - 81, of Wildwood Crest, NJ, passed away on Thursday, October 24, 2019. Millie was born on January 17, 1938 to Sicilian immigrants Giuseppe (Joseph) and Maria Scozzari. She grew up on East 23rd Street in Paterson and remained there until her marriage to Angelo Di Dolci on June 9, 1957. After her marriage, Millie and Angelo moved their young family to Kinnelon, NJ in 1963. Millie worked in the Kinnelon School System, as well as the Bloomingdale Methodist Church, and also volunteered as a Girl Scout Leader. Together with her husband, she hosted Sunday dinners, weekly barbecues at their backyard pool, and other family gatherings involving their big, extended, Sicilian family. In 1981, after spending their yearly family vacations in Wildwood by the Sea, Millie and Angelo decided to purchase the Sand Pebble Motel and move to Wildwood Crest, NJ. While living in Wildwood Crest, Millie worked as a secretary for Wildwood High School and eventually retired from Glenwood Avenue Elementary School. After retirement, she continued to substitute in the school system for close to a decade. Millie was a dedicated member of The First Assembly of God Church in Cape May, where she volunteered weekly in various roles such as nursery care, hospitality, and VBS, just to name a few. She faithfully attended weekly Bible studies where she met life-long friends. Millie most enjoyed riding her bicycle each morning on “the boards," splitting a waffle at Duffer’s, passing out life lessons to those who visited her on her front porch, eating a breakfast sandwich by the bay, coloring her inspirational messages, a McChicken (with no mayo) with a senior coffee, encouraging everyone to take notice of the beautiful blue sky, making homemade magnets for loved ones (and strangers as well), collecting scarves to wear while also crocheting new scarves to give, spending time with her family and friends, and her mission of passing out scriptural coins to fulfill The Great Commission (Matthew 28:18). Her home was always open to everyone for a meal and fellowship. Millie was pre-deceased by her parents, Giuseppe (Joseph) (2004) and Maria (2001) Scozzari; her husband, Angelo Di Dolci (2010); her brother, Salvatore Scozzari (2016); her daughter-in-law, Johanna Di Dolci (1995); and her brother-in-law, Ettore (Ed) De Marchi (1988). She is survived by her three children, Denise Di Dolci, Mark Di Dolci, and Michele Elmers and her husband Dennis; her six grandchildren, Nicholas and Dominic Di Dolci; and Rebecca, Adam, Andrew, and Maria Elmers; her sister, Mary De Marchi, of Wildwood Crest NJ; and her sister-in-law, Elizabeth (Bette) Scozzari, of Riverdale, NJ. The Celebration of Millie's life will begin with a gathering on Saturday, November 2, 2019 at 10:00 AM, then a service to follow at 10:30 AM at the First Assembly of God Church, 1068 Seashore Road, Cape May, NJ. An additional Celebration Service will be on Sunday, November 3, 2019 at 2:00 PM at Grace Evangelical Free Church, 5550 Berkshire Valley Road, Oak Ridge, NJ, 07438. In lieu of flowers, donations can be made to Rebecca's Homestead, PO Box 2068, Oak Ridge, NJ, 07438. www.rebeccashomestead.com

The family of Carmelina "Millie" Di Dolci created this Life Tributes page to make it easy to share your memories.