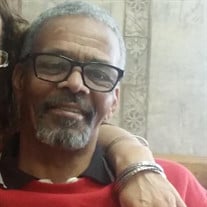 Calvin C. Freeman was born on January 13, 1955 in Cape May, New Jersey to the late Geneva Boyd-Freeman and James Freeman. He peacefully departed this life on June 25, 2020. Calvin worked with his father and brothers doing construction and masonry work for many years. He also had the honor of working with iconic men of Cape May cutting grass, working on the Vasser farm and collecting trash; these men include the late Jake Harris, Wally Hickman, Charles Coleman, William Harrell and Mayor Jack Vasser. Calvin was known to be a laid back man with a great smile but did not take any crap from anyone. He would help those who asked. Calvin just WAS. He lived a simple life and lived as he chose. His love for women was no secret. He was undeniably and unapologetically a ladies man. Calvin “loved the ladies." When possible, he enjoyed spending time with his siblings and kids. He is preceded in death by his mother Geneva Freeman and father James Freeman, his brother Floyd Freeman and his sister Rachael Freeman. Calvin is dearly missed and forever loved by his family which includes his ex-wife Ava Freeman. He leaves to cherish his memories to his sons Robert Matthews, Brian Harrison, Brian McNeal, Calvin Smith, Matthew Freeman, Aaron Freeman; his daughter Le-Lani Freeman and a young daughter. He has a host of grandchildren. He also leaves to cherish memories to his siblings, James (June) Freeman, Gladiola Johnson, Betty Ann Tony, Clinton (Punch), Carrie Ford, Adella Greene, Kelly Freeman, Denise Freeman, Katheryn Ginyard, Kathleen (Midget) Matthews, Doris (Annie) Freeman. Additionally, Calvin has a host of nieces and nephews who will miss him. Calvin's family would like to give notice and invite relatives and friends to celebrate Calvin's life as they welcome you to attend his homegoing graveside funeral ceremony on Tuesday, June 30, 2020 at 11am in Seaside Cemetery, 559 Route 9 South, Marmora, NJ. His graveside ceremony will begin at 11am.

Calvin C. Freeman was born on January 13, 1955 in Cape May, New Jersey to the late Geneva Boyd-Freeman and James Freeman. He peacefully departed this life on June 25, 2020. Calvin worked with his father and brothers doing construction and masonry... View Obituary & Service Information

The family of Calvin C. Freeman created this Life Tributes page to make it easy to share your memories.