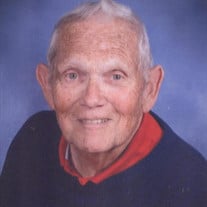 WOOD, Jr. Ph.D., Dr. Edwin L. “Buddy” – 84, of West Cape May passed away peacefully on Thursday, March 10, 2016 in the comfort of his home, surrounded by his family. Born and raised in Washington, DC, Buddy has been a resident of Cape May and West Cape May since 1984, after moving here from northern New Jersey. He also resided in Long Island, New York from 1962-69, and Connecticut from 1970-74. A man of honor, Buddy served in the United States Navy during the Korean War. Buddy spent more than 40 years working in the education field, including as an elementary school teacher in both Washington, D.C. and Long Island, New York, as well as four years as principal at the Noah Wallace School in Farmington, Ct. An accomplished professional, Buddy earned a Ph.D. in "Early Childhood Education" from New York's Hofstra University in 1976. He spent the last 16 years of his career as a principal in the Galloway Twp. School District in Atlantic County, including the Oceanville School and Smithville Elementary. Buddy was an active and enthusiastic member of the First Presbyterian Church of Cape May. He especially enjoyed the musical programs the church hosted and/or sponsored, with the Jazz Vespers being among his favorites. He and wife Larada "Jan" Wood were the owners of the Woodleigh House Bed & Breakfast Inn in Cape May from 1983 to 1999. Buddy was best known for his compassion, his love of family and of God. His bright smile tells the story of humor, optimism and perseverance. He was a champion of causes, including "Smile Train", the Cape May Food Closet, the East Lynne Theater Co. and Cape May Stage. He enjoyed a marriage of 53 years to his wife Larada “Jan” Wood, who passed away in 2011. He is also predeceased by his sister, Patricia Wood Jackson. Buddy is dearly missed by his family which includes his two children, Joy Wood Myers and Christopher H. (and Mimi) Wood; granddaughter, Mia E. Wood; niece, Sarah M. Jackson and nephew, Samuel W. Jackson. Buddy’s memorial service will take place on Saturday (March 19th) at 11am in the First Presbyterian Church of Cape May, 500 Hughes St., Cape May. The family will receive guests following the memorial ceremony in the church reception hall. Interment will be private and at a later date. In lieu of flowers, memorial contributions are suggested to: The Community Food Closet of Cape May, 500 Hughes St., Cape May, NJ 08204. - Although this website offers many options to send flowers, PLEASE do NOT send flowers and observe the request of the family to offer a memorial donation instead to the Community Food Closet of Cape May (address above).

The family of Buddy Wood created this Life Tributes page to make it easy to share your memories.

Send flowers to the Wood family.