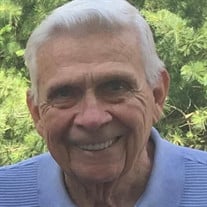 SMITH, Anthony P. “Bud” – 90, of North Cape May, passed away peacefully in the comfort of his home with his family at his side on Monday, January 24, 2022. Bud was born January 7, 1932 to Martin and Mary (McCarthy) Smith in Chester, PA. He married Evelyn (nee Paul) in 1965 and has been a resident of North Cape May for the past 56 years. A man of honor, Bud proudly served in the United States Army during the Korean War. At only 18-years-old he served as an Army medic and received multiple commendations for bravery in the Battle of the Chosin Reserve. Although he rarely discussed his time in combat, it was something he quietly took tremendous pride and accomplishment in. A man of faith, he was one of the founding parishioners of St. John of God RC Church, North Cape May. He read the Bible every morning. He worked as a bartender in many local establishments, ending his career at Henny’s in Stone Harbor where he worked for 22 years. In retirement he spent as much time as possible with his family and enjoyed traveling. He and Evelyn took many trips together with their favorite spots being Aruba and Ireland. Trips to Atlantic City brought him great joy and even some winnings over the years. He loved the beach and spent decades on Steger’s beach with his wife, children and grandchildren. Bud was a lifelong Philadelphia sports fans with a special love for the Phillies and the Eagles. A special highlight for him was attending Super Bowl XXXIX in 2005 with his son. True to his Irish heritage, Bud was a passionate Notre Dame football fan. He spent dozens of weekends in South Bend cheering on the Irish; first as a young man with his friends, and in later years taking his wife to enjoy the games. Affectionately called “long-shot” by his son in law, he loved a good wager and had an impressive track record for picking the winners. Bud was an amazing storyteller and kept us entertained over the years. The things he experienced in his younger days are legendary. His memory was phenomenal and his stories from 70 years ago included details like it was yesterday. We will do our best to remember them all and continue to tell them to each other. Bud kept a journal as a hobby. He had a system for sharing these and loved to tell us all what we were doing 5, 10, 15… years ago. When any of us heard the line, “it’s in the book” we knew it was the documented truth according to Dad. He loved to listen to music and had a great voice; he often sang to us without any music at all. Frank Sinatra songs will forever bring his memory to us. He enjoyed exercising and age 89 was still riding his stationary bike. Bud cherished all the time he spent with his children and grandchildren. Bud loved his family beyond words. Nothing made him happier than having everyone home and they are the reason he never gave up. He was incredibly proud of his children and told them that all the time. He was always thankful for his marriage and said Evelyn was the best thing that happened to him. Shortly before passing he said, “I have a lovely family”; You sure do Dad and we will hold each other up and remember you always. Bud is dearly missed and forever loved by his family which includes his wife of 56 years, Evelyn (nee Paul); three children, Michelle Smith (and Anthony Semonella), Deborah (and Sean) Felkins and Martin (and Karen) Smith; his sister, Mary McMahon; three grandchildren, Brandon Felkins, Collin Smith and Danielle Felkins; brothers-in-law, George (and Patty) Paul and Peter (and Linda) Paul; sister-in-law, Rosalie Paul; as well as several nieces and nephews. He was predeceased by four siblings, Helen King, Margaret Carney, Robert Smith and Martin Smith and brother-in-law William Paul. The family would like to acknowledge the wonderful compassionate care that Bud received from Holy Redeemer Hospice team in the past 2 months. We are so grateful to all his nurses and aides for their kindness. We also thank Dr. Andrew Drake for his many years of care and advice. Relatives and friends are invited to Bud’s viewing on Friday (Jan. 28th) from 9am until 10am in the Spilker Funeral Home, 815 Washington St., Cape May. His Mass of Christian Burial will follow and begin at 11am in St. John Of God Church, 680 Town Bank Rd., North Cape May. Interment will follow the Mass in St. Mary’s Cemetery, Cape May. In lieu of flowers, memorial contributions are suggested to either Fox Chase Cancer Center, online at: https://www.foxchase.org/giving/ways-give/donate-now or Holy Redeemer Hospice, online at: https://www.redeemerhealth.org/giving/memorial-and-tribute-gifts

The family of Bud Smith created this Life Tributes page to make it easy to share your memories.