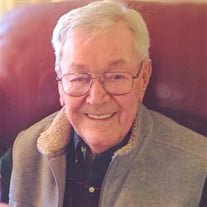 LUNDQUIST, Bruce F. – 85, of Cape May and formerly of Chadds Ford, PA passed away on Thursday, December 28, 2017. A man of honor, Bruce earned the rank of Captain, serving in the 8th Air Force, Strategic Air Command during the Korean War. He graduated from Denison University in Granville, OH and later received his MS at Ohio State University. As well as serving as a Captain in the Air Force, Bruce’s career also encompassed earning the position of Vice President of Hobart-William Smith Colleges in New York and Beaver College (Arcadia University) in Glenside, PA. Bruce became interested in Real Estate while converting a 140-year-old Pennsylvania “bank barn” into a home for he and his wife, Betsy, in the charming village of Chadds Ford, PA. In this “second profession,” he became a Real Estate Broker, concentrating in historic and “adaptive” residential properties. For 13 years he chaired the Chadds Ford Township’s Historic Architectural Review Board. During their years in Chadds Ford, Bruce also served on the Board of Directors of the YMCA and the Brandywine American Red Cross, participating in many activities ranging from disaster support to Desert Storm “Homecoming.” Retiring in 1998, he and Betsy moved to Cape May after renovating Betsy’s family’s “old summer home,” where they sat by the sea with their boxer, Molly, enjoying their Golden Years which also included them running around the country doing good things for the Red Cross. Bruce volunteered as an auditor for the National Headquarters Audit Services from 1999-2006; served on the Cape May County Board of Director’s Governance Committee and volunteered at Cape Regional Medical Center from 2011-2015. In his spare time, he played a mediocre game of golf and was active in the Retired Officers Assoc. and the Naval Air Station Wildwood Foundation, both being links to his early years as an Air Force Officer. He is predeceased by his wife, Betsy (2010) and his brother, Charles. Bruce is dearly missed by his family which includes his children, Mark (and Eileen) Lundquist, Brad (and Laurie) Lundquist, Laurie (and Alan) Schwartzstein, Lisa (and Craig) Freitag, Lee Ann (and John) Shaw and Mark (and Luz) Alsentzer; 20 grandchildren; 4 great grandchildren. Funeral services are private. In lieu of flowers, memorial contributions are suggested to the Naval Air Station Wildwood Foundation online at www.usnasw.org or by mail to: 500 Forrestal Rd., Cape May Airport, NJ 08242. (Spilker Funeral Home, Cape May) condolences can be shared at spilkerfuneralhome.com

LUNDQUIST, Bruce F. &#8211; 85, of Cape May and formerly of Chadds Ford, PA passed away on Thursday, December 28, 2017. A man of honor, Bruce earned the rank of Captain, serving in the 8th Air Force, Strategic Air Command during the Korean War.... View Obituary & Service Information

The family of Bruce Lundquist created this Life Tributes page to make it easy to share your memories.