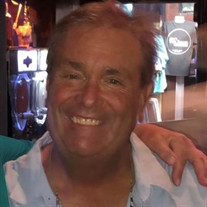 Robert E. “Bobby” Wallace, III - 59-year-old lifelong resident of Cape May, NJ passed away on May 20, 2021 surrounded by his adoring family. Bob was larger than life, his enduring optimism, charisma and passion made him a once in a generation presence. Bob was born on April 10th, 1962 in Bordeaux France, the beloved son of Robert Jr. and Edith (nee Sandman) Wallace. He graduated from Lower Cape May Regional HS in 1980 where he earned 10 varsity letters in football, baseball, and track while establishing lifelong friendships. Bob attended Wesley College followed by Temple University where he pursued his passion for football. Bob graduated from California State University, Long Beach, College of Ocean Engineering where he earned a master’s in commercial diving and became a NAUI instructor. Throughout his life Bob earned many maritime licenses culminating with a 100-ton Captain’s license which he utilized operating tugs, private charters, and boat deliveries from the Great Lakes to the Bahamas. Bob and his parents owned the Wallace’s’ Whalers Cove for over 30 years; a seasonal bar and restaurant located on the Delaware Bay that afforded him the opportunity for many adventures and travel from teaching diving in St. Thomas USVI to helicopter skiing in Banff, CA. Bob enjoyed hunting, fishing, and skiing all over the world. Bob’s biggest pleasure in life was his family. He is survived by his cherished wife of 15 years, Toni (nee Caporaletti). He is the proud father to three daughters, Meghann (Nicholas Licari), Delaney, Kaitlyn, and his beloved son Bobby IV; his adoring mother, Edith Sandman Wallace; sister, Deborah Wallace Zimmermann (Leo Zimmermann) and niece, Alexandra Zimmermann. To honor and celebrate Bob, friends will be received by his family at the Spilker Funeral Home, 815 Washington St., Cape May on Wednesday evening (May 26th) for a walk-through visitation from 6pm until 8pm. There will be additional visitation time offered on Thursday morning (May 27th) at the Assembly of God Church, 1068 Seashore Rd., Cape May from 10am until 11am where Bob’s funeral ceremony will begin at 11am. Interment will follow in the Cold Spring Cemetery, Lower Township.

Robert E. &#8220;Bobby&#8221; Wallace, III - 59-year-old lifelong resident of Cape May, NJ passed away on May 20, 2021 surrounded by his adoring family. Bob was larger than life, his enduring optimism, charisma and passion made him a once in... View Obituary & Service Information

The family of Bob Wallace created this Life Tributes page to make it easy to share your memories.