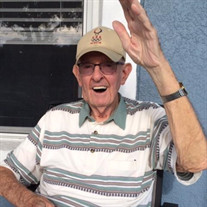 MAGEE, Robert “Bob” – 83, of Cape May, NJ and Orlando, FL passed away on June 8, 2016. A man of honor, Bob proudly served in the United States Army during the Korean War. He worked briefly for the Philadelphia Inquirer and as a mathematics teacher prior to his career as a systems analyst/programmer for the Naval Depot in Philadelphia, retiring in 1989. “What’s on the agenda today?” was one of Bob’s well-known quips while living his life fully and with enthusiasm. He enjoyed telling stories (some tall), square dancing with friends, singing, Atlantic City Casino trips, golfing, sitting on the porch waving hello, Philadelphia Eagles Football, adding to his ever-growing baseball hat collection, and most of all the love he cultivated over the years and will continue to share with his family. He is predeceased by his son, Bob; mother, Gertrude; father, Edwin; sisters, Sis and Maureen and his brother, Ed. Bob is dearly missed by his loving family which includes his wife of 59 years, Gladys; sister, Betty Taylor; 2 sons; Mike Magee, Jim (and Denise) Magee; daughter-in-law, Stella Magee; daughter, Teri (and Rob) Van Fossen; niece, Celeste Stein, who he loved like a daughter; 14 grandchildren, Kristian, Stephanie, Leigh Ann, Bobby, Eddie, Maria, Mary, Annie, Manny, Shannon, Faith, Kelly, Chris and Meg; 10 great grandchildren, Liam, Caelyn, Sophia, Madilyn, John, Aiden, Grady, Ellie, Nolan and Lizzy; cousin Dr. Theodore (and Terry) Berry; sister-in-law, Geri Lemmon; nieces, nephews, extended family and many close friends. Mass of Christian Burial will be celebrated on Saturday (June 18th) at 10:30am in Our Lady Star of the Sea Church, 525 Washington St., Cape May where friends will be received from 9:30am to 10:30am. Interment will follow Mass in Cold Spring Cemetery, Lower Twp. In lieu of flowers, memorial contributions are suggested to a Veterans Organization and/or a Senile Dementia Alzheimer's Organization. - Although this website offers many options to send flowers, PLEASE observe the request of the family to send a memorial contribution instead to either a Veterans Organization and/or a Senile Dementia Alzheimer's Organization.

The family of Bob Magee created this Life Tributes page to make it easy to share your memories.

Send flowers to the Magee family.