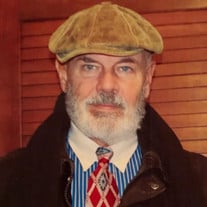 Robert Grubb, Jr., a.k.a. "Jetty Bob," chief fisherman of the Lehigh Ave rock pile in Cape May Point, tipped his cap to the world on Nov. 12, 2021, as he took his last breath surrounded by family, listening to his Spotify playlist. They broke the mold with this true Renaissance man. A First Lieutenant officer in the United States Army, Robert swept his wife of 53 years, Martie, off her feet while stationed in Wurzburg, Germany. He would often recount when he first laid eyes on her as if a beam of light struck him. "Your mother looked like an angel," Bob would say. The moment she walked through the door, he said, "Take a good look, fellas; that's the girl I'm going to marry." Their serendipitous encounter, and subsequent whirlwind romance, brought them home to settle their family home in South Jersey. Life was never dull in Bob's house, especially in his garage of organized chaos. A natural creative, Bob's unique style raised his four girls to be lifelong learners, remember their manners, change a flat tire, bait a fishing hook, be in tune with humanity and nature, and know a happy chance when they see one. He is survived in life by three daughters Laura Anna Baldwin of Glenside, PA; Martha Colleen Ferraioli of Brooklyn, NY; Sarah Grubb of NC, and is now sipping a vanilla whisky and catching up with his beloved daughter, Tess Emily Grubb, who preceded him in death. He was never so proud as the day his girls brought men into the family. He finally had partners in crime for his antics, rounds of poker, and gag jokes. He shared special bonds with his sons-in-law Tim, John-Peter, and Kenny, casting a net for minnows, picking up gems at yard sales, and luring them to visit when the 'blues or stripers' were running. He was affectionately known as 'Bob-Bob' by his seven grandchildren, his greatest fans. He loved them as brilliant and independent characters in their own right, including Tyler, Josie, Helaina, Max, John, Robert, and Lindsay. They all believed Bob-Bob was the notorious pirate Captain Kool, whose secret map once led them to buried treasure. He is also known for his haircuts, tasty cakes, lottery tickets, picture wall, BB guns, funky Vans, and hoarding just about everything. His annual 'Bob-Bob Games' were the joy of Thanksgiving Day, testing agility, balance, aim, and ability to guess the number of M&Ms in a jar. With family roots running deep in Cape May Point, Bob Grubb Jr. lived his final days proud to be the oldest surviving lifeguard, serving in the '60s with his dearly departed friend Jack Leming. He was so proud of the men and women who protect us in the Cape May Point Beach Patrol every summer, winning guard races in the boat named for his late parents 'Bob and Nancy Grubb'. As a dedicated son, Bob Jr. is survived by his two younger brothers, Paul and David Grubb, and their spouses, Charles and Marti, respectively. Bob Jr.'s passing further marks the 50th anniversary of the CMP Beach program, with the 2021 seasonal tag named as a tribute to his late father, Bob Grubb Sr., the founding director of the beach program in 1972 and CMP lifeguard in the 1930s. Known as "Bob" or "Bobby" to his cast of local characters, he was also the Dr. Dolittle of Cape May's wildlife. He never met a dog he didn't love or that didn't know Bob had doggie biscuits in each pocket of his cargo shorts. Sitting on his front porch, his melodious whistle and click of his cheek would attract critter attention far and wide. He would line up the treats for the animals that appeared or stopped by—peanuts, raisins, corn, and seed brought his regulars out of the trees, including "Tapper," the blue jay, who came rapping at his front door. His spirit is now free on the wings of every catbird calling for their raisins on the deck. The Grubb family is deeply grateful to the men and women of Cape May Point Beach Patrol and the Township of Cape May Point, who gave their time and energy to accessibility efforts. Having a sand wheelchair and entrance ramps to the beach to access his favorite fishing spots provided Bob with the best last summer of his life. A warm thank you to Bill Oat, Chris Garrison, and their teams for going above and beyond in service to a fellow lifeguard. His courageous battle with prostate cancer is the ultimate demonstration of his intense love for life and his fight to have one more day with his family in the Cape May Point home he loved so dearly. Spilker Funeral Home will preside over a small, close family graveside ceremony. In lieu of flowers, honor Bob's memory by contributing to the Cape May Point Beach Patrol to support the access, care, and safety of our beautiful beaches through “In Memory Of” for acknowledgment purposes and convenience by visiting www.inmemof.org/bob-grubb-jr

Robert Grubb, Jr., a.k.a. "Jetty Bob," chief fisherman of the Lehigh Ave rock pile in Cape May Point, tipped his cap to the world on Nov. 12, 2021, as he took his last breath surrounded by family, listening to his Spotify playlist. They broke... View Obituary & Service Information

The family of Bob Grubb Jr. created this Life Tributes page to make it easy to share your memories.