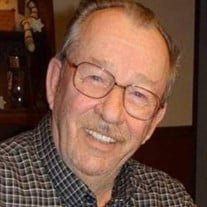 DOUGLASS, Robert S. “Bob” – 82. With great sadness, the family announces the passing of a wonderful man. Bob was born in Cape May and was a lifelong resident of the area. He graduated from Cape May High School in 1959. A man of honor, Bob proudly served in the United States Army. Over the years, Bob worked in general construction, first as a laborer and later as an operator for various contractors. Bob was a past member of the Moose Lodge, Cape May Point Volunteer Fire Company #1 and the West Cape May Volunteer Fire Company. A few of Bob’s talents consisted of playing piano and craftsmanship. He was determined with projects set forth and about always giving it his all. His interests included spending time with family (especially during camping trips), NASCAR and going to watch the races, and enjoying the sweets of life, literally! Bob was an easy-going, big-hearted, fun loving family man. Bob passed peacefully on Tuesday, August 10, 2021. He is predeceased by his parents, Robert and Martha Douglass; two brothers, Roger Douglass and David Douglass. Bob is dearly missed and forever loved by his family which included his wife of 59 years, Karen (nee Sheppard); his sons, Steven Douglass and Mark (Terri) Douglass; two granddaughters, Lauren (Dan) Place, and Madison Douglass; great-granddaughter, Everly Place; brother, Russell (Geri) Douglass; as well as nieces, nephews, cousins, in-laws, extended family, and many dear friends. Relatives and friends are invited to attend Bob’s graveside service on Saturday (Aug. 14th) located at the Veterans Field of Honor of Cold Spring Cemetery at 11 o’clock AM. In lieu of flowers, memorial contributions are suggested to West Cape May Volunteer Fire Co. and/or Cape May Point Volunteer Fire Co. #1. (Spilker Funeral Home, Cape May) info and condolences: spilkerfuneralhome.com

The family of Bob Douglass created this Life Tributes page to make it easy to share your memories.