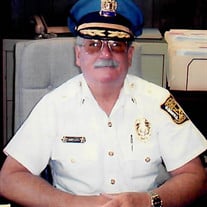 BOYD, Robert Lane – 80, Cape May Police Chief, Ret., of Cape May City, passed away at his home on July 21, 2021. At the age of 18, Bob arrived in Cape May as a recruit at the United States Coast Guard Base where he served for 5 years, retiring in 1964. In 1971 he began his lifelong career in the Cape May City Police Department; rising up the ranks, he retired as Chief in 2001. A man of great faith, Bob was baptized in the Delaware Bay in 2013 and attended Calvary Baptist Church in Oceanview. He believed in doing what was right and not what was self-promoting or easy. He loved serving as a police officer in Cape May and cared deeply for the people of his community. After retiring, he taught criminal law at the Cape May County Police Academy until 2018 and was a member of the Cape May County Technical School Board from 2005 to 2021, serving as board president for six years. Bob loved hunting, fishing, walking on the beach and around the community he loved, and he loved baseball, especially his San Francisco Giants, of whom he was a lifelong fan. His family was Bob’s greatest accomplishment and joy. Bob is dearly missed and forever loved by his family which includes his wife of 59 years, Carol (nee Parker) Boyd; three children, Lewis Timothy “Tim” (Tammy) Boyd, Laurie (Lewis) Thomas and Lisa (James) Faulkner; his 5 brothers, 1 sister, 7 grandchildren- Robert, Timothy, Emily, Stephen, Hannah, James and Sabrina, 9 great-grandchildren, his sisters-in-law, and many nieces and nephews. In Bob’s honor, relatives and friends are invited to wear their baseball gear to his graveside memorial ceremony on Wednesday (July 28th) at 3pm in Cold Spring Cemetery, Lower Township. In lieu of flowers, memorial contributions are suggested to Calvary Baptist Church, PO Box 93, South Seaville, NJ 08246. (Spilker Funeral Home, Cape May) info and condolences: spilkerfuneralhome.com

The family of Bob Boyd, CMPD Chief, Ret. created this Life Tributes page to make it easy to share your memories.