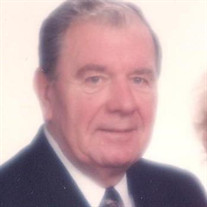 BARND, Robert R. “Bob” – 89, of North Cape May passed away peacefully in the comfort of his home on Tuesday, September 1, 2015. Bob was born in Forty Fort, PA to the late William Henry Barnd, Sr. and Mary Barnd (nee Wright). He graduated from Bennett High School, Buffalo, NY and later graduated from Bryant and Stratton Business School, also in Buffalo. A man of honor, Bob served in the United States Navy during World War II. He enjoyed a career with RCA, Electronics Division that began in 1947 and ended upon his retiring in 1987 as a Buyer Specialist. Bob had been a resident of North Cape May since 1987 after moving there from Woodbury. He was a member of the Cape May United Methodist Church where he served on the Finance Committee, ushered and in 2011, was awarded "Father of the Year". He was a loving and faithful husband for nearly 7 decades who adored his wife, Jane. Bob thoroughly enjoyed his music; big band music mostly, to which he and Jane enjoyed dancing. He loved to golf and fish to unwind. He coached little league for his son's baseball team and his daughter had him wrapped around her finger. He had a bellicose voice ('the voice of God offstage' as many friends would refer to him), with a heart that was always in the right place. Bob was a voracious reader of history and current affairs, and always finished crossword puzzles with a pen. "Ask Dad... He knows!" was the constant adage of the Barnd household. The Barnd family had the great fortune to learn many things from a great man to last them a lifetime. Bob instilled respect, pride, confidence, responsibility, courage, strength and love. He is predeceased by his brother, William Henry Barnd, Jr. and his sister, Marilyn Reagan. Robert is dearly missed by his loving family which includes his wife of 67 years, Jane (nee Billings); two children, Kathy Mottola of Cape May Point and Jeffrey Barnd of Maryland; three grandchildren, Michael, Abigail and Ava; nephew, Robert (and wife Julie) Barnd of Amherst NY, and niece, Karen (and husband John) Zell. Bob’s memorial service will take place on Friday (Sept. 11th) at 11am in the Cape May United Methodist Church, 635 Washington St., Cape May where friends will be received from 10am – 11am. Interment is private and at a later date. In lieu of flowers, memorial contributions are suggested to the Cape May United Methodist Church, PO Box 472, Cape May, NJ 08204. (Spilker Funeral Home, Cape May) info and condolences:spilkerfuneralhome.com - This website offers many options to send flowers but we ask that you please observe the request of the family to make a memorial contribution to the Cape May United Methodist Church, PO Box 472, Cape May, NJ 08204 instead.

The family of Bob Barnd created this Life Tributes page to make it easy to share your memories.

Send flowers to the Barnd family.