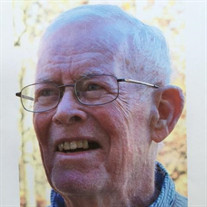 Myers, William V. (Bill), of North Cape May, NJ died 8/30/2016. He was 86 years old. He was born on Feb 11, 1930 in Philadelphia PA to the late Raymond J. Myers and Anna (Walsh) Myers. He graduated from North Catholic High School in 1948. In 1951, he enlisted in the Air Force. After basic training at Lackland AFB, he attended Radar school in Bilouxi, MS. He served a three year tour in England during the Korean War and was promoted to Staff Sergeant. After the service he was employed by Long Lines (AT&T) for 33 years. He retired in 1986. After retirement he earned a real estate license and became a real estate agent for Century 21. Bill is dearly missed by his loving family which includes his beloved wife of 61 years, Eleanor Marie (McGrody) Myers; 6 children, William (Susan) of Stafford VA, Thomas (Pamela predeceased) of Stafford VA, Patricia Ann of Cape May, NJ, Michael (Sharon) of Stafford, VA, Bob (Tammie) of Chesterfield, VA and Mary Ellen Piatt (Randall) of Blacklick, OH; 14 grandchildren; 3 great grandchildren; his sisters, Rita M. Burns, Norristown PA and Marjorie McCloy (predeceased) of Douglassville, PA and many nieces and nephews. He loved football and baseball and was a diehard Phillies and Eagles fan. He spent many years coaching little league baseball teams. He loved gardening, repairing things around the home, and his faithful dog, Jersey girl. Most of all he loved his family. His greatest joy was being by Eleanor’s side watching his family grow. Bill was a member of the Knights of Columbus, Stella Maris Council 3546 and an active member of St. John Neumann Parish. He served as a Eucharistic Minister, an usher and an altar server at funeral masses. He helped start the Holy Name Society and he was a member of the church financial committee. He was always willing to lend a helping hand. Visitation will be held at St. John of God RC Church, 680 Townbank Road, N. Cape May on Saturday (September 3rd) from 10am to 10:50am followed by a Mass of Christian Burial beginning at 11am. Burial will be at Cold Spring Cemetery, Lower Twp. In lieu of flowers, a memorial contribution can be made in Bill’s memory to Holy Redeemer Hospice at https://www.holyredeemer.com/Main/DonateNow.aspx or a charity of your choice. - Although this website offers many options to send flowers, PLEASE observe the request of the family to send a memorial contribution instead.

The family of Bill Myers created this Life Tributes page to make it easy to share your memories.

Send flowers to the Myers family.