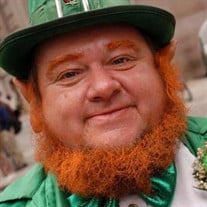 HARE, William Joseph “Bill” – 60, of Cape May and formerly of Philadelphia passed away on June 10, 2016 at home. Bill was born in Philadelphia on June 28, 1955 to the late Joseph Michael Hare and Anne Agnes (nee Amenhauser). He graduated from Northeast Catholic High School in 1973 and later attended DeSales College and the restaurant school. Bill proudly served in the United States Navy as a Corpsman on the USS Nimitz in the Mediterranean for 4 years where he provided medical services to evacuated Mideast hostages. Most recently he was employed by WalMart in Rio Grande. Bill was well-known as “Bill the Leprechaun” throughout Philadelphia and Wildwood; often on floats in parades for St. Patrick’s Day and Irish Weekend in Anglesea. He was featured in the Channel 6 Action News montage each March, and was often featured in the St. Patrick’s Day coverage in the Philadelphia Inquirer. He had been Santa Claus for Strawbridge and Clothier in downtown Philadelphia for several years. A man of different personas, whether costumed as the Easter Bunny, a Christmas elf, a clown, or as ‘Hat Man’ in the old Red Garter in Anglesea, NJ, he delighted in entertaining and will be remembered as the life of the party. Bill is survived by his brother, Joseph M. (Linda); his sisters, Anne T. Kugler (George), Maureen A. Luschini (David), Donna M. Mellon (James) and Kathleen Hare; his aunt, Marie Amenhauser as well as numerous nieces and nephews. Bill’s memorial gathering will take place on Saturday (June 25th) from 10am to 11am in the Spilker Funeral Home, 815 Washington St., Cape May. Please where your favorite shade of green as a tribute to Bill! Bill’s Mass of Christian Burial will be celebrated on Tuesday (June 28th) at 10am in St. Anne’s RC Church, E. Lehigh Ave. & Memphis St., Philadelphia, PA where friends will be received from 9am to 10am. Interment will follow Mass in St. Dominic’s Cem., Phila., PA. In lieu of flowers, donations may be made to the Citizens/Veterans Advisory Committee (CVAC) c/o Jacki Meiluti or to Volunteers in Medicine, 423 N. Route 9, Cape May Court House, NJ 08210. - Although this website offers many options to send flowers, PLEASE observe the request of the family to send a memorial contribution instead to either the Citizens/Veterans Advisory Committee (CVAC) c/o Jacki Meiluti or to Volunteers in Medicine, 423 N. Route 9, Cape May Court House, NJ 08210.

The family of Bill Hare created this Life Tributes page to make it easy to share your memories.

Send flowers to the Hare family.