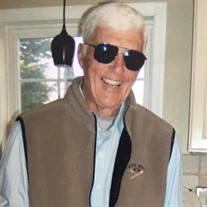 William Robert Donnelly 5/05/1931 - 2/21/2018 Bill Donnelly passed away last month at the age of 86. He died on February 21st surrounded by his five surviving children and his wife of 63 years. Bill has been a resident of Cape May for close to 30 years. He is predeceased by his son Bill Donnelly, Jr. He is survived by his wife Dorsey, his sister Evelyn, and his children Anne Donnelly, Evelyn Donnelly, Kit Donnelly, Jay Donnelly, Rebecca Donnelly and his 10 grandchildren. Bill was born in Mineola, New York and went on to attend Hofstra University in Hempstead, New York. At Hofstra he played football and lacrosse and soon found himself in love with the lacrosse coach’s daughter Dorsey Myers. He entered the Marines after college and during his tenure, married his beloved Dorsey in 1955. A steadfast son and brother, loyal athletic team member, military man and husband, he also excelled during his career at Western Electric. He provided well for his wife and six children and prided himself on saving a dime or two. The family spent every summer in Cape May, N.J. with a large group of assorted relatives and friends until he retired at 55 and he and Dorsey moved permanently to Cape May. Up until his death, you could find Bill on his bicycle, down at the tennis courts, reading the New York Times on the porch, telling stories at the dining table and having a Wednesday night drink at the Grand. He took pride in taking care of his home with his own hands. He was a wonderful friend, son, brother, story teller, and pretty decent guitar player too, and he excelled as a husband and father. Bill stood by his wife and all six of his children through many challenging times with optimism, steadfastness, kindness and support. He truly was the rock and the foundation of the Donnelly clan and will be deeply missed. Services will be held from 2 to 6pm on June 9th, 2018 at 1031 New Jersey Ave. Cape May, NJ. 08204.

William Robert Donnelly 5/05/1931 - 2/21/2018 Bill Donnelly passed away last month at the age of 86. He died on February 21st surrounded by his five surviving children and his wife of 63 years. Bill has been a resident of Cape May for close... View Obituary & Service Information

The family of Bill Donnelly created this Life Tributes page to make it easy to share your memories.