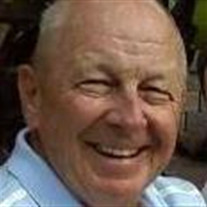 CARNEY, William T. “Bill” – 80, of Cape May and formerly of Barrington, IL and Woodstock, IL passed away peacefully on Friday, February 20, 2015. Bill was born in Brooklyn, NY to the late Thomas Carney (NY City Firefighter) and Mildred “Sally” Carney. He graduated from Farmingdale High School and later graduated from Hofstra University with a Bachelor’s Degree in English. He served and was honorably discharged from the United States Army. Bill was dedicated to his profession; he worked for over 55 years in the television advertising industry in Manhattan, Chicago and most recently in Atlantic City. His sense of humor was infectious, and often you could see the mischievous twinkle in his blue gaze as he set up a punch line. He was loving and generous with his heart and spirit. As an avid golfer, he loved to compete against and with his family and friends at Biltmore CC, Bull Valley GC, and Cape May National. Every day was an opportunity for an adventure for Bill. He never missed one of his children’s track meets, golf matches, football games, or equestrian events. He was always encouraging and was always a true and loyal husband, father, grandfather, and friend. He will never be forgotten by anyone had the pleasure of crossing paths with him both personally and professionally. Some may be “One in a Million”, Bill Carney was “One in a Lifetime”. . He is predeceased by his first wife, Patricia (1994). Bill is dearly missed by his loving family which includes his wife, Jeannine Carney; three children, Thomas (and Lacey) Carney, Kevin (and Summer) Carney and Meghan Carney (and Patrick Anderson); three stepchildren, Christine (and Mike) Tansey, Lisa (and Mike) Brakora and Stephen (and Cari) Saalfelder; nine grandchildren. Mass of Christian Burial will be celebrated on Monday (Feb. 23rd) at 1:30pm in Our Lady Star of the Sea Church, 525 Washington St., Cape May where friends will be received from 12:30pm – 1:30pm. Interment will be private and at a later date. In lieu of flowers, memorial contributions are suggested to a charity of your choice. (Spilker Funeral Home, Cape May) info and condolences: spilkerfuneralhome.com -

The family of Bill Carney created this Life Tributes page to make it easy to share your memories.

Send flowers to the Carney family.