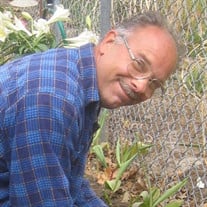 William C. “Bill” Blew – 63, of Villas and formerly of Southwest Philadelphia, PA, passed away on Friday, June 8, 2018. Born in Philadelphia, Bill was a longtime resident of Southwest Philadelphia where he graduated from John Bartram High School. He and his family moved to Villas from Southwest Philadelphia in 1994. Bill began his working career with General Sound Incorporated in Philadelphia where he worked as a field technician. In 1993 he began his own business and founded WCB Sound and Communications; a business he operated until 2004. Thereafter he worked for Home Depot in Burleigh as an electrical specialist and most recently he was working for Auto Zone in Rio Grande which was consistent with his passion for cars. Bill had a brilliant mind and an inventive spirit. He was inquisitive about all things and was a very quick learner. A few of his auto restorations that he was proud of were his Harley Davidson golf cart three-wheeler; ’62 Ford Fairlane and his ’85 Ford Ranger. To see some of Bill’s projects visit: https://www.youtube.com/user/MyGoingsOn/videos Bill was a ham operator and at one time built his own radio station. He knew how computers worked and could repair and rebuild most “desktop” computers (he left the laptop work to his daughter, Alicia). Gardening was also a passion, as he built a greenhouse and engineered intricate sprinkler systems. He was very proud of his tomatoes and actually built a cart that he kept out front of the family’s home where he sold many of his tomatoes to passersby. With his mind always searching ways to make improvements and modifications, the stairs that accessed the family pool had their own custom built “foot washer” for clean entry into the pool and also had another built for the house steps. These are just a few examples of the many adventures and inventions of Bill’s life. Above all things Bill enjoyed being at home and doing these types of things, teaching and learning, with his family close at hand to offer love, support and a lot of laughs along the way. He is predeceased by his parents, Albert and Virginia Blew, as well as his brother, Allen Blew. Bill is dearly missed by his loving family which includes his wife of 38 years, Ruth (nee Abbott); four children, Diana Blew, Justine (and Justin) Weaver, Alicia Blew and Matthew Blew; one granddaughter, Madelyn Weaver. Relatives and friends will be received on Thursday from 11 am – 12 noon in the Spilker Funeral Home, 815 Washington St., Cape May where a time of sharing thoughts and memories to celebrate Bill’s life will be offered by family and friends beginning at 12 noon.

The family of Bill Blew created this Life Tributes page to make it easy to share your memories.