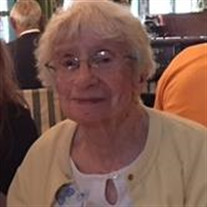 YOUNGER, Elizabeth G. “Betty” – 93, of Cape May passed away peacefully on Thursday, April 14, 2016. A summer resident of Cape May since 1969, Betty and her late husband, Tom moved here permanently in 1981 from North Wales PA. Betty was a graduate of Hallahan Catholic Girls’ High School in Philadelphia and shortly thereafter began working for the Reading Railroad where she became masterful in operating the comptometer in the accounting department. She met Tom after he returned from World War II and after marrying they moved to Eureka PA. After their two sons were born Betty helped her husband start a wholesale flower business now known and operating as Younger & Son Inc where she was the bookkeeper. Betty enjoyed Cape May and volunteering her time wherever she could for the good of the community, more specifically as a member of the Cape May Garden Club planting tulips each year at the Physick Estate for the MAC Tulip Festival. Betty was a devoted reader of the Cape May Star and Wave and The Philadelphia Inquirer newspapers. It was very important to her to know everything that was going on in Cape May and the surrounding areas. She loved going out to eat and shopping with her friends Alma and Lois. She always looked forward to purchasing chances for the car raffle at Star of the Sea Church for many years despite never winning. She was a stickler for staying on meal schedule making no allowances for interruptions. Cape May meant everything to Betty never having the desire to travel too far from her beloved home. She is predeceased by her husband, Thomas J. (1983); brother, Larry Geoghegan and sister, Arlene Geoghegan. Betty is dearly missed by her loving family which includes her two sons, Stephen Younger of Tucson, AZ and Thomas (and Fay) Younger of Hatfield, PA; one sister, Emily Mills; three grandchildren, Tommy, Laura and Kali. Betty’s funeral service will be held on Tuesday (Apr. 19th) at 11am in the Spilker Funeral Home, 815 Washington St., Cape May where friends will be received from 10am to 11am. Interment will follow in St. Mary’s Cem., Cape May.

The family of Betty Younger created this Life Tributes page to make it easy to share your memories.

Send flowers to the Younger family.