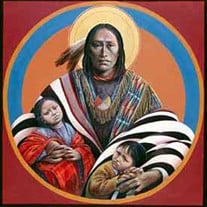 THEOBALD (nee Walkingstick), Elizabeth W. “Betty” – 92, of Cape May Point passed away peacefully on Saturday evening, March 28, 2015. Betty was born in Muskogee, OK, a citizen of the Cherokee Nation. She attended Syracuse University and most importantly, while in Syracuse she met her husband, the late Rev. Donald K. Theobald. As a minister’s wife, Betty and her family moved with frequency and graciously served many communities alongside of her husband before becoming a permanent resident of Cape May Point where she has resided for many years. Betty was very proud of her Cherokee heritage and shared her traditions and culture with many adults and children, encouraging understanding of the rich gifts Native people bring to the world. While in Cape May Point, she and her husband founded The Bicycle Parade which she hosted for the past 44 years. As a woman of profound faith, she taught her family how to truly love by serving the people in need around her. She had a heart for children, especially the hungry and the abandoned. She had a heart so filled with love that it spilled over in abundant joy and laughter. Along with her husband, Betty is also predeceased by her brother, Syversen Walkingstick and her daughter, Margaret Anne “Pegi” Holt. Betty is dearly missed by her loving family which includes her four children, Sheryl Edwards and her husband, Richard; Donald K. Theobald, Jr. and his wife, Kate Davis; The Rt. Rev. Dr. Carol J. Gallagher and her husband, Mark; Betsy Richards and her husband, Scott; two sisters, Joy Walkingstick Couch and Kay WalkingStick and her husband, Dirk Bach; one brother, Charles Walkingstick and his wife, Quembe; eight grandchildren, Lee, Emily, Ariel, Jonathan, Phoebe, Matthew, Cole and Annabel; three great grandchildren, Kyle, Claire and Lillian. Relatives and friends will be received from 6pm – 8pm on Wednesday (Apr. 1st) in the First Presbyterian Church of Cape May, 500 Hughes St., Cape May. Betty’s funeral ceremony will be held on Thursday (Apr. 2nd) at 11am in the Church. Interment will follow in the Cold Spring Cemetery, Lower Twp. In lieu of flowers, memorial contributions are suggested to: Sister Jean’s Kitchen, PO Box 5146, Atlantic City, NJ 08404-5146. -

The family of Betty Theobald created this Life Tributes page to make it easy to share your memories.

Send flowers to the Theobald family.