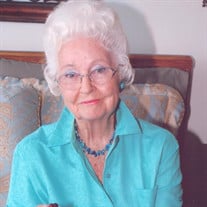 CORNELY (nee McCarty), Elizabeth N. “Betty” – 102, of Cape May passed away peacefully on Monday morning, October 6, 2014. Born in Philadelphia, PA, Betty has been a resident of Cape May since 1945. Betty grew up in Philadelphia and Wildwood. Betty won, three years in a row, the Wildwood Boardwalk Easter Parade Fashion Show. She worked as a professional model in Florida and she modeled in various local charity events. Betty's oil paintings used to hang in the halls of Cape Regional Medical Center. In her later years, she created beautiful necklaces known to all as "BETTY'S" She was a member of Our Lady Star of the Sea Church, Cape May. Betty enjoyed a marriage of 63 years to the late Joseph A. Cornely (2003). She was also predeceased by her sister, Lola Lee. Betty will be dearly missed by her loving family which includes her three children, Betsy (and Marty) Schiffbauer, Lola (and Chuck) Carullo and Joanne (and Charles) Vogdes; eight grandchildren, Mark, Paul, Gina, Kim ,Cindy, Chas, Charlie and Brad; fourteen great grandchildren. Mass of Christian Burial will be celebrated on Friday (Oct. 10th) at 9:30AM in Our Lady Star of the Sea Church, 525 Washington St., Cape May where friends will be received from 9AM – 9:30AM. Interment will follow in Ivy Hill Cemetery, Phila., PA. In lieu of flowers, memorial contributions are suggested to: Wildwood Catholic, 1500 Central Ave., Wildwood, NJ 08260. (Spilker Funeral Home, Cape May) info and condolences: spilkerfuneralhome.com

The family of Betty Cornely created this Life Tributes page to make it easy to share your memories.

Send flowers to the Cornely family.