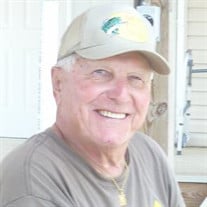 BONIFAZI, Bernard J. “Bernie” “Moe” – 85, of Cape May and formerly of Trenton passed away peacefully on Sunday, January 4, 2015. Bernie was born and raised in Trenton before moving to Blackwood in 1990, and moved to Cape May in 1994 where he has been a resident since then. He worked for the Public Works Dept. in Trenton for 20 years before retiring in 1994. Bernie enjoyed all that life had to offer, especially biking, fishing, playing with his favorite dogs Kona and Voodoo, and making friends. He had beautiful blue eyes that lit up any room he walked into and a smile that was as equally inviting. Bernie never met a stranger and treated everyone like a long lost friend. He was one of a kind. Most importantly, Bernie was the most loving husband, father, grandfather, great grandfather, brother, and uncle anyone could ask for. He truly loved his family. Moe is predeceased by his mother, Emma (Marconi) Bonifazi and father, Bernardino Bonifazi, Sr.; five of his siblings, Irene Bonifazi, Viola Enutaro, Helen Mosca, Rose Baranowski and Ed Bonifazi. Bernie is deeply missed by his loving family which includes his wife of 24 years, Joanne Leona Bonifazi; sister, Maryanne “Tootsie” Bussiglieri; brother, Henry (and Francine) Bonifazi; sister-in-law, Rose Marie Bonifazi; stepchildren, Anna Marie (and Paul) McGinley and Anthony (and Nicole) Leona; grandchildren, Jessica, Lauren (and Steve), Chelsea and Alison; great grandchildren, Jaedyn and Braylee; as well as many nieces, nephews, cousins and dear friends. There will be a viewing on Thursday (Jan. 8th) from 6-8pm in the Spilker Funeral Home, 815 Washington St., Cape May and again on Friday morning from 10am – 10:50am in St. Joachim’s RC Church, 20-56 Butler St., Trenton with Mass of Christian Burial beginning at 11am. Interment will follow in St. Mary’s Cem., Trenton. In lieu of flowers, memorial contributions are suggested to: St. Jude’s Children’s Hosp., 501 St. Jude Place, Memphis, TN 38105-1942 or to Love of Linda Cancer Fund, PO Box 1053, Wildwood, NJ 08260. Info and condolences: www.spilkerfuneralhome.com

The family of Bernard J. Bonifazi created this Life Tributes page to make it easy to share your memories.

Send flowers to the Bonifazi family.