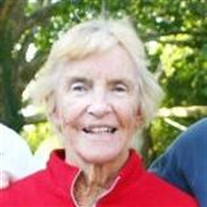 KOPP (nee Reilly), Barbara Marie - passed away on April 23, 2016, in the company of her family. Born on May 29, 1929, in New York City to Redmond and Rita Reilly, she resided in Haddonfield, NJ and Medford, NJ before moving to Cape May 50 years ago. She attended Camden Catholic High School and the University of Bridgeport. Her first job was as a secretary to Howard B. Hess, a commercial real estate broker in Philadelphia. She postponed her career in real estate to raise her seven children but returned to the field in 1973 when her youngest children entered school. In 1980 she became one of the first female brokers in Cape May when she started her own office, Century 21 Kopp & Co. She continued in real estate until her retirement in 2008. She served in numerous offices with the Cape May County Board of REALTORS including 2 years as Director. Barbara was active in the Cape May City Chamber of Commerce and the Century 21 So. Jersey Broker’s Council. She was a member of Our Lady Star of the Sea Parish in Cape May, active in church and school affairs serving on numerous committees (including the Good Samaritans) and volunteering for over a decade at Bingo while her children attended the parish grammar school. She never played again. In her free time (really?) she was a master of the cryptogram and crossword. She could best any contestant on Wheel of Fortune. She enjoyed traveling, especially cruises and her annual trips to Aruba. She loved driving her Sebring Convertible with the top down, always assuring her passengers, “We aren’t lost, we’re just taking an alternate route, and isn’t the scenery beautiful?” She is predeceased by her son, Gary Kopp; her sister, Rita Johnson and brother, Gerry Reilly. Barbara is survived by her children; Carol, Jay (Jennifer), Kristin, Brian, Pam and Suzy; her grandchildren , Aubrey, Patrick, Devon, Catherine, Reilly and great-grandchildren, Jett and Sydney as well as nieces, nephews and cousins and her devoted best friends, Bill Keegan and Susanne Moore. Mass of Christian Burial will be celebrated on Thursday (April 28th) at 9:30am in Our Lady Star of the Sea Church, 525 Washington St., Cape May with visitation from 8:30am to 9:20am. Interment will be private and at a later date. In lieu of flowers, please make donations to Covenant House, 461 Eighth Ave, New York City, NY 1001. - Although this website offers many options to send flowers, PLEASE observe the request of the family to send a memorial contribution instead.

KOPP (nee Reilly), Barbara Marie - passed away on April 23, 2016, in the company of her family. Born on May 29, 1929, in New York City to Redmond and Rita Reilly, she resided in Haddonfield, NJ and Medford, NJ before moving to Cape May 50 years... View Obituary & Service Information

The family of Barbara Kopp created this Life Tributes page to make it easy to share your memories.

Send flowers to the Kopp family.