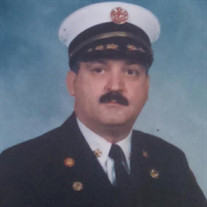 TREON, Arthur E. – 62, of North Cape May passed away on Wednesday, November 19, 2014 as a result of health complications incurred while serving a fire scene in North Wildwood on Tuesday evening. Art was a lifelong resident of the Cape May area. He retired as a Lieutenant from the Cape May County Sheriff’s Office where he rose through the ranks and held various positions (1982-2007). After his retirement, he began working for the Cape May County Office of Emergency Management and he currently held the position of Deputy Coordinator. Art joined the Town Bank Volunteer Fire Company in 1975. He obtained his 10 year star and became a Town Bank Life Member in 1985. He held the office of Vice President; President; Lieutenant; Captain; Deputy Chief; finally taking the position of Chief of the department from 1995-2009. After respectfully stepping down as chief, Art took over the role of training officer as well as one of their safety officers. He received various awards and commendation, too numerous to recount. Highly trained, he was a Chief fire academy instructor for the Cape May County Fire Academy. Art was a member of the Cape Island Masonic Lodge #30 F&AM. He was a Green Bay Packers fan; enjoyed being on the road on his Harley motorcycle; and enjoyed the simple things in life, but most of all, he will be long-remembered and forever loved for being a devoted husband, a loving father and Poppy; and dear and true friend to so many. He was recently predeceased by his mother, Ruth Treon (2014). Art will be dearly missed by his loving family which includes his wife, Dora; two sons, Arthur (and Kimberly) Moore and Brian (and Jennifer) Moore; eight grandchildren, Meaghan, Marisa, Gavin, Quinn, A.J., Drew, Owen and Bree; siblings, Dottie Carman, James (and Marleen) Treon, Sondra Cox, Robert Treon and Gary (and Amber) Treon; also many nieces, nephews, cousins, close friends and his firefighting brothers. Art’s memorial service will begin at 12 noon on Saturday (Nov. 29th) at the Lower Cape May Regional Performing Arts Center, 687 Rte 9, Cape May. The Performing Arts Center will be open on Saturday morning from 8:30am – 11:30am for those who wish to gather in his memory. We are requesting that all who plan to attend Art’s memorial service, to please arrive and be seated BEFORE 11:30am at the Performing Arts Center, as his family will be escorted and arrive just prior to the beginning of the 12 noon memorial service. There will be a time of gathering and fellowship with the family that will be announced and will follow the memorial service. In lieu of flowers, memorial contributions in Art’s memory are suggested to: Town Bank Vol. Fire Co., Inc., PO Box 796, Cape May, NJ 08204.

TREON, Arthur E. &#8211; 62, of North Cape May passed away on Wednesday, November 19, 2014 as a result of health complications incurred while serving a fire scene in North Wildwood on Tuesday evening. Art was a lifelong resident of the Cape... View Obituary & Service Information

The family of Art Treon created this Life Tributes page to make it easy to share your memories.

Send flowers to the Treon family.