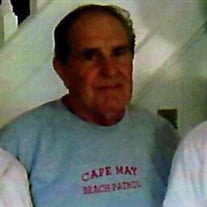 CANNONE, Arnold – 89, born in Cape May and a lifelong resident, passed away on Saturday, September 28, 2019. Born a twin, Arnold was always very closely connected to his twin brother, Harold. He attended Cape May High School and served in the United States Army. Arnold was a standout athlete in high school and played on the Cape May High School football team. He later played semi-pro football for the Cape May Rockets and served on the Cape May Beach Patrol for many years. Along with his brother, Harold, they worked together for many years as painters in the Cape May area under their own name “Cannone Brothers Painting.” He was a member of the Cape May VFW and enjoyed spending time there with his brother, Harold and their friends over many years. Always an avid sports fan, he and his brother coached the Cape May Tornadoes in the 70s, coaching his son, Philip and nephew, Anthony. He also enjoyed supporting his nephew (Mike Wilson) in his football and coaching career. Arnold was a Philadelphia Eagles Fan through thick and thin. To say the least and for the sake of brevity, he will be long-remembered as a colorful personality among the Cape May locals. He is predeceased by his first wife, Jane; his second wife, Donna; his son, Phillip and three brothers, Cleto Cannone, Fulvio ”Fliver” Cannone and Robert Cannone. Arnold is survived by his twin brother, Harold Cannone; his nieces and nephews and his great nieces and great nephews. Arnold’s memorial ceremony will take place on Saturday (Oct. 12th) at 11am in the Spilker Funeral Home, 815 Washington St., Cape May where friends will be received from 10am until 11am. Interment will follow in St. Mary’s Cem., Lower Twp. In lieu of flowers, memorial contributions are suggested, to offset end of life expenses, for convenience through “In Memory Of” by visiting www.inmemof.org/arnold-cannone Info and condolences: spilkerfuneralhome.com

CANNONE, Arnold &#8211; 89, born in Cape May and a lifelong resident, passed away on Saturday, September 28, 2019. Born a twin, Arnold was always very closely connected to his twin brother, Harold. He attended Cape May High School and served... View Obituary & Service Information

The family of Arnold Cannone created this Life Tributes page to make it easy to share your memories.