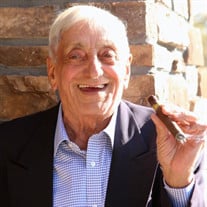 ARMAND TURANO October 19, 1929 – February 12, 2021 TURANO, Armand – passed away on Friday, February 12, 2021 at the age of 91 years old. Armand was predeceased by the love of his life, his wife, Elvira; his mother, Mary; his father, Joseph; his six brothers and his sister. Armand is forever loved by his family which includes his children, Marybeth, Gerard, John and Joseph and wife, Kathleen; grandchildren, Brian, Rebecca, Elizabeth and Meagan. Armand was born in Nutley, NJ and later resided in Mahwah, NJ until his and his wife’s retirement to Cape May in 1997. Armand served his country as a medic in the U.S. Army Medical Corps during the Korean War. Later, he worked, until his retirement, in food service management for nearly 60 years. Armand’s Mass of Christian Burial will be celebrated on Thursday (Feb. 18th) at 12:30pm in Our Lady Star of the Sea Church, Cape May. There will be a viewing in the Spilker Funeral Home, 815 Washington St., Cape May prior to Mass on Thursday from 11am until 12pm. Interment will take place in Maryrest Cemetery, Mahwah, NJ on Friday (Feb. 19th) at 1pm. In lieu of flowers, memorial contributions are suggested by the family to St. Jude Children’s Research Hospital.

The family of Armand Turano created this Life Tributes page to make it easy to share your memories.