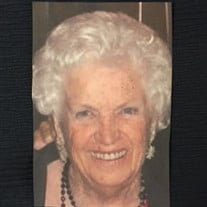 GIBBONS, Anne Marie – 93, of Cape May, Mother of Eleven. Died on July 29, 2016 in Cape May. Anne M. (nee Marsh) was born on June 16, 1923 in Philadelphia, PA to Frank Marsh and Anna (Gallagher) Marsh in the Ascension Parish. She graduated from Little Flower High School for Girls in 1941, attended Strayer Business School, and worked for the Pennsylvania Railroad during World War II, dispatching supplies and vehicles to the European war effort. Anne married Harry J. Gibbons on April 4, 1945. They were married for 61 years until his death in 2006. They moved to Cape May in 1957, where they purchased a hotel on Ocean Street. In 1960, they moved to the big house on New York Avenue where Anne raised her children and lived until her death. She said her greatest achievement was this: Mother of Eleven. She is survived by her children and their spouses, John (Mary-Jo), Scottsdale, AZ, Anne Marie (Joe Colonna), Cape May and Wilmington, DE, Catherine Sabatini (Robert Von Bargen), Santa Monica, CA, Harry (Debra), Sacramento, CA, Terese (Jim Murphy), New Ipswich, NH, Regina, Boston, MA, Edward (Lisa Samara) Linwood, NJ, Joseph (Dana Davies), Philadelphia, PA, Paul (Stephanie), New Jersey, and Patricia (Jeff Vogt), Ortley Beach, NJ. Also by her brother, Frank N. Marsh, 21 grandchildren, 14 great-grandchildren and many nieces and nephews. In addition to her husband, she was predeceased by her son, Jeffrey F. Gibbons, her grandsons, Ned T. Gibbons and Calvin F. Cwik, and her brother, James T. Marsh. Mass of Christian Burial will be celebrated on Thursday (Aug. 4th) at 1:30pm in Our Lady Star of the Sea Church where there will be a viewing from 12:15pm to 1:20pm. Interment will follow Mass in the Cape May Co. Veterans Cem., next to her husband. In lieu of flowers, donations may be made in her memory to Little Flower High School for Girls, 1000 W. Lycoming St, Philadelphia, Pa, 19140.

The family of Anne Marie Gibbons created this Life Tributes page to make it easy to share your memories.

Send flowers to the Gibbons family.