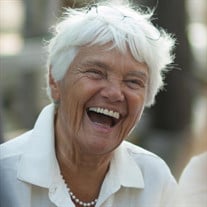 AnnaStina Ferguson, better known as Stina, passed away on August 9, 2020. Born in Teaneck, New Jersey, on February 4, 1924. She moved to Valley Cottage, New York, a suburb of Nyack, in 1929 where she grew up with parents, Clara and Gustaf Svahn, Swedish born, and younger sisters, Alphild and June. After graduating from Congers High School, receiving her BS from Upsala College and winning her Master’s from Teachers’ College at Columbia University, it was time to start teaching, which she did at Valley Cottage Elementary, Nyack Public Schools and finally Clarkstown Central, all 30 enlightening years. Stina and Howard (Fergie) Ferguson, a frequent high school boyfriend, were married on October 2nd, 1948. They began to build their unique homestead at 326 Old Mill Road where they lived an active life with their daughter Jill for 44 years. Summers between teaching and retirement were spent with Ferg and daughter Jill in Cape May on the waters of the famous Yacht Ave, socializing on Congress Beach, and exploring around town on her bicycle. Finally, the family was able to buy and own the first Boathouse with Jill and her husband, Rod Henderer, and continued to enjoy making memories there. Stina’s love for her ancestral family found her many visits to relatives in Sweden, a highlight. In her early years, she mastered Swedish and was fluent in reading and writing. She was always delighted to hear grandchildren, Anna Stina and Peter, refer to her as MorMor from the Swedish Mother’s Mother. After 44 active years surrounding Valley Cottage it was time to leave and move to the welcoming 20 miles at Sea, Cape May, as permanent citizens - where life has been good to us. Shortly after relocating, she joined the Cape May Garden Club, where she found her niche. She was a passionate horticulturist who enjoyed gardening, exhibiting, and sharing her knowledge, including some latin names, while making friendships along the way. Volunteering for MAC was another highlight for Stina. Living close to Nature, always with a smile, a keepsake reminder, “that’s Stina!” Stina's memorial ceremony will take place at a later date. In lieu of flowers or gifts, donations for the scholarship fund of The Garden Club of Cape in memory of “Stina” may be mailed to PO Box 235 Cape May, NJ 08204.

AnnaStina Ferguson, better known as Stina, passed away on August 9, 2020. Born in Teaneck, New Jersey, on February 4, 1924. She moved to Valley Cottage, New York, a suburb of Nyack, in 1929 where she grew up with parents, Clara and Gustaf Svahn,... View Obituary & Service Information

The family of AnnaStina Ferguson created this Life Tributes page to make it easy to share your memories.

AnnaStina Ferguson, better known as Stina, passed away on August...