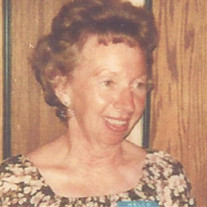 LETTS (nee Kneiblher), Anna May – 100, of Cape May and formerly of Haddonfield, passed away peacefully on Wednesday, June 27, 2018. Anna May graduated from Haddonfield Memorial High School and later earned her Registered Nursing Degree from the Hahnemann School of Nursing in 1940. She enjoyed a long and rewarding career in the nursing profession. She began her career working as a public health nurse in Philadelphia. Thereafter she worked for Haddonfield Visiting Nurses and upon her move to the Cape May area she worked for Burdette Tomlin Memorial Hospital, where she served as Evening Supervisor of Nurses. Anna May concluded her career after working as a visiting nurse in Cape May County, retiring in 2002 at the age of 84. Anna May witnessed Cape May grow from a small city with tar-and-gravel side streets to the lively destination it is today. She was an active member of the community and spent many years with the Women's Community Club of Cape May. Her greatest joys were always her friends and family, whether cooking holiday dinners or meeting up with friends for their weekly "Lunch Bunch." In her free time, Anna May was often found tending her rose bushes, working on a quilting project, or with a mystery novel. She was a strong woman, with a take-charge personality, and will be dearly missed by her family. She is predeceased by her husband, Albert F. Letts (1974); her son, Martin Albert Letts (1990); her sister, Mrytle M. (Kneiblher) Gravenor (1998) and her brother, Martin “Bud” Kneiblher (2010). Anna May is dearly missed by her loving family which includes her daughter, Janice (and Ernie) Utsch, III of Cape May and granddaughter, Rachel Utsch of Cape May as well as nieces and nephews. Visitation will be held on Monday (July 2nd) from 10am until 11am in the Spilker Funeral Home, 815 Washington St., Cape May with Anna May’s funeral ceremony to follow and begin at 11am. Interment will follow at the Haddonfield Baptist Cemetery, Haddonfield, NJ at approximately 1:30pm. In lieu of flowers, memorial contributions are suggested to the Alzheimer’s Association. For convenience and acknowledgement purposes these donations can be made through “In Memory Of” by visiting: www.inmemoryof-memorial.org/annamay-letts

The family of Anna May Letts created this Life Tributes page to make it easy to share your memories.