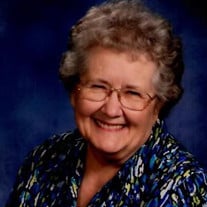 McLeish (née Fairbanks), Anita - 86, of North Cape May passed away peacefully in her sleep in the comfort of her home on Thursday, March 21, 2019. Born April 3, 1932 in Yonkers, NY, she was the daughter of Karl and Opal Shepard Fairbanks. Anita was a devoted wife and mother, and after raising her family she worked as a postal clerk for the United States Postal Service in Palisades, NY. Upon retiring, she moved from Orangeburg, NY, to North Cape May and was a permanent resident since 1994. Anita was a blessing to family, friends and strangers alike through her many acts of love, kindness and generosity. Most of her waking hours were spent doing things for others, with a big focus on church work and missions. She was famous within her congregation for making her lemon meringue pies for the men’s dinners. Beyond her kitchen magic, she used her creative mind, agile fingers and artistic eye to make most anything with a needle, fabric, and yarn, usually crafting items for the church mission fairs. She was a kind and loving person who brought joy, love, music and good energy to this world. Anita was blessed with a marriage of 64 years to the late William S. “Bill” McLeish (2014). She is also predeceased by her two sisters, Beverly Rodel and Nadine Drohan. Anita is dearly missed and will be forever loved by her family, which includes her five children, Holly (and Ralph) Hebb, Debra (and Steve) Welle, William S., Jr. (and Susan) McLeish, Wendy McLeish and Heather Schnabl; 12 grandchildren; and 19 great-grandchildren, as well as nieces, nephews and cousins. The celebration of Anita’s life will be held on Sunday (March 31st) at 3pm in the Cape May United Methodist Church, 635 Washington St., Cape May, where friends will be received by the family from 2:30pm until 3pm. In lieu of flowers, memorial contributions may be made to the Cape May United Methodist Church, PO Box 472, Cape May, NJ 08204. (Spilker Funeral Home, Cape May) info and condolences: spilkerfuneralhome.com

McLeish (née Fairbanks), Anita - 86, of North Cape May passed away peacefully in her sleep in the comfort of her home on Thursday, March 21, 2019. Born April 3, 1932 in Yonkers, NY, she was the daughter of Karl and Opal Shepard Fairbanks.... View Obituary & Service Information

The family of Anita McLeish created this Life Tributes page to make it easy to share your memories.