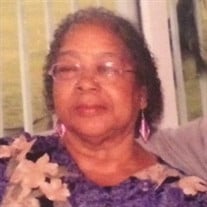 VASSER (nee Hicks), Alma B. – 80, of West Cape May passed away on Tuesday, September 27, 2016. Born in Cape May on April 29, 1936 to the late Mary and William Hicks, Alma has been a lifelong resident of the Cape May area. She graduated from Cape May High School where she was a drummer in the marching band. Alma worked for many years as a nurse’s assistant at Crest Haven Nursing Home, Cape May Ct. House before retiring. She was a devoted and active member of the Allen A.M.E. Church, Cape May. Alma enjoyed family get-togethers, bible study, baking, cowboy shows and music. Along with her parents she is predeceased by her son, Gary Vasser; sister, Marie Hicks and brother, William Hicks. Alma is dearly missed by her family which includes her husband of 59 years, William, Sr.; her four children, William, Jr., Esther Vasser, Christopher and Mary Vasser as well as, nine grandchildren; three great grandchildren; two great great grandchildren and a host of nieces, nephews and cousins. Funeral services will be held on Tuesday (Oct. 4th) at 11am in the First Assembly of God Church, 1068 Seashore Rd., Cape May where there will be a viewing from 9:30am until 10:40am. Interment will follow in Cold Spring Cem., Lower Twp. (Spilker Funeral Home, Cape May) info and condolences: spilkerfuneralhome.com

The family of Alma B. Vasser created this Life Tributes page to make it easy to share your memories.

Send flowers to the Vasser family.