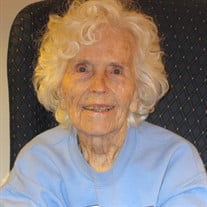 MATRAY (nee Bowen), Alberta – 95, passed away peacefully in her sleep while in the care of Holy Redeemer Hospice and residing at Brookdale Senior Living, Cape May Court House on Friday, June 23, 2017. Alberta was born in Duffield, VA in 1922 into a world of coal mining. Her family, wanting to escape this life of endless hardship and early death, emigrated to Oklahoma soon after she was born. They survived as laborers, subsistence farmers, and hunters in their new home. Alberta spent much of her early life picking corn, peanut, and cotton crops. Hers was not an easy life. When World War II arrived, she found herself helping to build B-25 bombers in Oklahoma City. There she met and later married her 1st husband, Melvin W. Funk, a Sergeant in the Army Air Corps. They soon began to build a family, and returned to Melvin’s home of New Jersey at war’s end. After 28 years, their marriage ended in divorce. Alberta subsequently met and married Gordon L. Matray, with whom she lived happily until his death. Alberta’s 95 years of life was full and varied. She was a homemaker most of her life, and she was good at it. Her hobbies included painting, ceramics, sewing, and golf (which she pursued until her hands were no longer able to hold a club). She had a passion for being well-dressed which she worked at endlessly. She was well turned-out for any occasion. She was also a devoted fan of home shopping clubs. She is predeceased by her parents Nina and Henry Bowen, and her brothers Earl, Gilmer, Hobert, and Harvey Clay. Alberta is survived by her son Allen W. Funk, her daughter Joyce E. Von Funk, and her granddaughter Whitney T. Wijnhausen. Funeral services have been held privately. Condolences shared at: spilkerfuneralhome.com

MATRAY (nee Bowen), Alberta &#8211; 95, passed away peacefully in her sleep while in the care of Holy Redeemer Hospice and residing at Brookdale Senior Living, Cape May Court House on Friday, June 23, 2017. Alberta was born in Duffield, VA... View Obituary & Service Information

The family of Alberta Matray created this Life Tributes page to make it easy to share your memories.